In front of the organ after the service (Photo: Mary Stewart)

On Sunday, 30th June 2019  we celebrated John Strain’s 40 years as organist at Ballee Non-Subscribing Presbyterian Church. John discovered his talent as a musician at a young age and assumed the mantle of organist back in 1979. In all those years John has only missed a Sunday service on three occasions and is well-known for his wide knowledge of tunes and his willingness to find just the right hymn even at a moment’s notice. In that time John has played at many baptisms, weddings and funerals as well as at many other local churches including the local Church of Ireland for the last thirty years. Some years ago John released a record of his playing on the church’s organ made by Samuel Dalladay of Hastings in 1912 and in 2012 played for the congregation’s organ centenary twelve-hour hymnathon.

With Doreen Chambers and Sophia Cleland who both read lessons during the service (Photo: Mary Stewart)

This special service was built around six hymns chosen by John who also gave his reasons for choosing them. During the service readings were given by church members and John’s tremendous commitment, loyalty and achievement in the church was celebrated as a special presentation was made to him to mark this significant anniversary. The hymns John chose were ‘Morning has broken’, ‘Seek ye first the Kingdom of God’, ‘Go work in my vineyard’, ‘I heard the voice of Jesus say’, ‘When I survey the wondrous Cross’, and ‘Great is Thy faithfulness’, all from Hymns of Faith and Freedom. 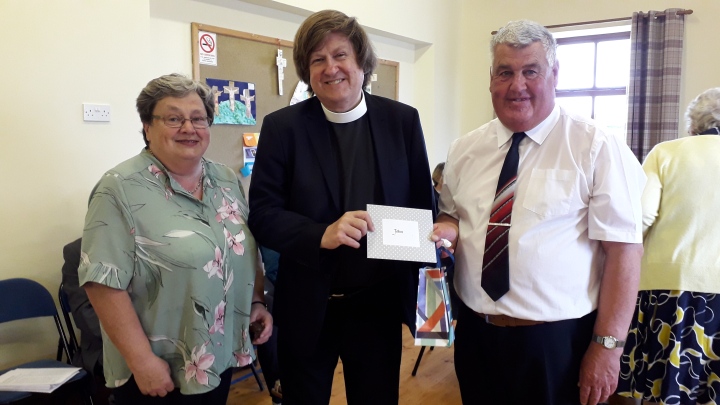 An audio recording of the service is available.

You can read about Ballee’s Carnegie organ here