The Children’s Day services held in June each ear are always important occasions for all three of our churches. They bring to the front the tremendous work done by the children and young people and the Sunday School teachers in the churches throughout the whole year. All the work prepared for the denominational Sunday School Exhibition held at the start of June is displayed in our churches and the prizes won by the children at the exhibition are distributed along with prizes for attendance. Between the three congregations the Sunday Schools won an astonishing 34 prizes, a considerable achievement. On top of that the children lead the worship with songs, readings, prayers and often dramatic pieces which have been carefully written and prepared. Each of the Sunday Schools also work at fundraising for an appropriate charity over the year which is an expression of their awareness of the needs and concerns of wider society.

Below I will post some pictures of the occasions held on 19th and 26th June.

High points this year included Ballee winning the Millennium Cup for the Most Original Entry (for the sculpture featuring the fish) and the presentation to Joy McBride of a cheque for all the money they have raised for Mainstay DRP.

There was some great work on display in Downpatrick and as well as music and readings the service included a presentation to Mary Stewart, the church secretary, by Laura Neill on behalf of the Sunday School. Mary has recently been awarded the British Empire Medal in the Queen’s Birthday Honours List for services to the Downpatrick community and it was good to be able to congratulate her as a congregation. 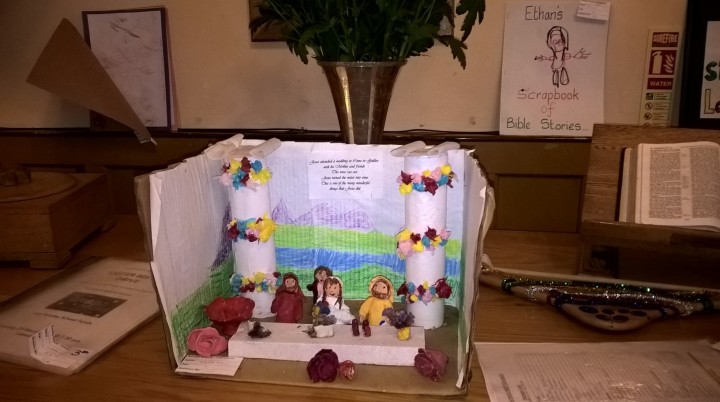 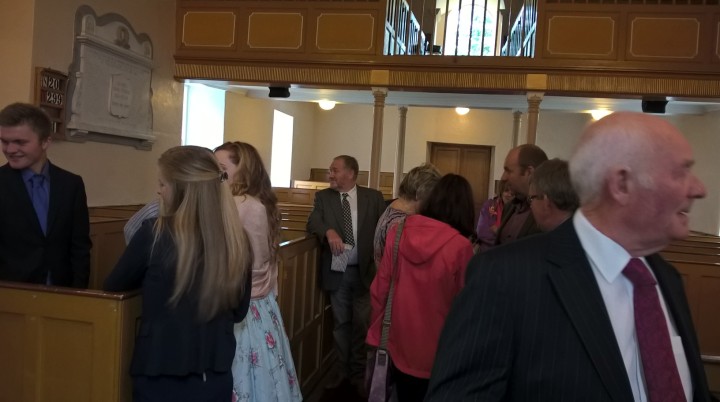 The Sunday School excelled itself in both the denominational Sunday School Exhibition (winning an astonishing total of 18 prizes) and the first class service they led at Clough. Kayla Ramsey presented a cheque for £280 raised for charity by the children.

In my previous post on Platt Chapel (https://velvethummingbee.wordpress.com/2016/05/20/platt-chapel-rusholme/)  I asked what happened to the ancient silver communion plate that belonged to the chapel and included a silver porringer dated to 1641. Both Len Smith and Ann Peart tell me that they think this was deposited in the Treasury at York Minster, which is very encouraging to know.

Len also tells me that his record of the clapper falling from the bell cote as the bell was rung for worship one night happened in his presence. In those days the chapel was used as a placement for students and it was during his time as a student at the Unitarian College that the old bell finally lost its clapper, narrowly missing the heads of those arriving for worship.

The bell, without its clapper, still hangs above the chapel, so far as I know. It is not clear what happened to the many memorials that were situated in the chapel, including Worsley family hatchments. Part of the chapel was separated to form what was known as the Worsley Chapel and here some of that family had been buried. This was later screened off and must still be there, possibly still with memorials but certainly complete with tombs.

Another piece of information which I received from Len is entirely new to me. Edwin Swindells’ history of 1959 mentions the unveiling of a memorial to a chapel member who was killed in the First World War in 1919. The memorial took the form of a stained glass window and he records it as follows:

In 1919, the memorial window to the late Lieut. Siegfried Herford, only son of Professor and Mrs. C. H. Herford, who was killed in the war, was placed in the chapel by some of his friends.

Len Smith has sent me a picture of this very fine window, taken when it was still in the chapel but which, he tells me, is now at the Eskdale Outward Bound Centre:

The window includes the inscription:‘I will lift up mine eyes unto the hills, from whence cometh my help’, Psalm 121:1

The Herford family were very prominent Unitarians in the nineteenth and twentieth centuries. A number of them were ministers and many of them were educationalists or academics of very great achievement.

“Professor and Mrs. C. H. Herford” were Charles Harold Herford (who has an entry in the Oxford Dictionary of National Biography) and his wife Marie (née Betge). C.H. Herford was a highly respected literary scholar and in the course of his distinguished academic career was professor of English Literature at Manchester University from 1901 to 1921. In this time he might have been expected to attend Cross Street Chapel where his family had many connections and his maternal grandfather (John Gooch Robberds) had been minister. However, they seem to have had a connection with Platt Chapel and following the death of their only son in France in January 1916 a memorial window was erected in Platt Chapel in his memory.

Edwin Swindells describes Siegfried Herford as Lieutenant but this seems to be a mistake. Although he was a member of the Manchester University Officer Training Corps from 1909 to 1913 and  applied for a commission at the outbreak of war eventually he enlisted in  the 24th Battalion Royal Fusiliers (Sportsmen’s Battalion) in February 1915 and was sent to France soon after where he was killed at Bethune on 28th January 1916.

Much of this detail comes from the Manchester University Roll of Honour (http://www.ww1.manchester.ac.uk/roll-of-honour/) where he features and which also notes that he graduated from Manchester in 1912 with a first class BSc before going on to complete a thesis for his MSc which was never awarded following the onset of the war. This is a very useful site, although not free of error, it mentions the memorial window as being “believed to have been rescued from a chapel in Didsbury that was demolished,” but it does have some good detail about his German background (which is claimed on some websites as being the reason for him not being commissioned) – he had a German mother and spent part of his education in Germany. It may have been here that he developed his love of mountains and climbing which was an area in which he came to excel in his short life.

He was a very notable person in climbing circles and despite being killed at the age of just 24 has a degree of fame in those circles that has lasted to this day. The short biography of him on the site of the Mountain Heritage Trust describes him as being “widely credited with being the first rock-climber in the ‘modern’ twentieth century idiom (he is celebrated for the ascent of the first ever ‘Hard Very Severe’ rock climb: Scafell’s Central Buttress)” and any internet search throws up dramatic photographs of him perched on the top of ledges or ridges or in the company of such luminaries as George Mallory. He has been the subject of films and a full length biography by Keith Treacher (Siegfried Herford: An Edwardian Rock-Climber) was published in 2000.

He was buried in the Brown’s Road Military Cemetery, Festubert, Pas de Calais, France (http://www.everymanremembered.org/profiles/soldier/188954/) but was included on the University of Manchester War Memorial in the main quadrangle, the bronze Fell and Rock Climbing Club memorial to those of its members killed in the First World War and situated on the summit of Great Gable in the Lake District, and some of his friends paid for the stained glass window depicting him climbing which was unveiled in Platt Chapel in 1919 and later moved to the Eskdale Outward Bound Centre.

How it came to be moved from Platt Chapel is detailed in a short article by Muriel Files in the 1974 (No 64 Volume XXII No II) issue of ‘The Fell and Rock Journal’:

The existence of the window came to the notice of the committee after Siegfried Herford’s sister, Mrs. Braunholtz, wrote to the Secretary about her anxiety as to its future because she had heard that Platt (Unitarian) Chapel in Manchester, where the window is situated, was threatened with demolition…In fact, there proved to be no immediate threat to the window although the chapel is indeed no longer needed by the Unitarian Church and the Trustees are seeking a suitable purchaser.

At the time the intention seemed to be to move the window to UCM, although this clearly never happened. Muriel Files goes on to say something more about the window:

The window was given in memory of Siegfried Herford by C. E. Montague of the Guardian, known to some mountaineers for his essay ‘In Hanging Garden Gully’, surely one of the most entertaining climbing tales ever written. Of the figure representing her brother Mrs. Braunholtz writes: ‘It was based on a photograph taken by a fellow climber and is a very good likeness of my brother, even to the shock of fair hair described by Geoffrey Winthrop Young. The window makes his face look a little more bony than it actually did—after all he was only 24 and still had a boyish look’.

We will add the photograph of the memorial window in Platt Chapel depicting Siegfried Herford to the Faith and Freedom Great War Project (http://www.faithandfreedom.org.uk/GWindex.htm).