The edition of Christian Life published to celebrate the centenary of the Trinity Act never fails to provide something of interest. Leafing through its pages the other day looking for something else I chanced upon the half page or so celebrating Willaston School. As with everything else in the whole issue it gives a celebratory account of the institution in question. I notice that the regular Sunday services were conducted by the headmaster or the Unitarian minister in Nantwich and that religious teaching in the school consisted of “instruction in the Bible, and in the history of liberal thought and religion”. The fees were £63 per annum although bursaries were available for the sons of ministers. It paints a positive picture of music, the classics, cricket etc. with every boy cultivating his own allotment in the twenty-four acres of grounds and “a resident staff of university men”.  It provided “a public school education on modern lines”. For those who could afford it, it was a golden age, the last days of the old order before everything was changed utterly by the First World War.

One of the things the recently published book Willaston School Nantwich edited by Andrew Lamberton and published by Willaston and District History Group brings out is how heavily militarised the school became after the war started. There is nothing unusual in that but nearly every boy and member of staff became a member of the Army Cadet Corps and many of them were to be killed at the front in a matter of years, a great many of them decorated for bravery as I have already noticed in the previous post. At least one founding pupil took a different view though. Although I have mentioned him in the forthcoming review of the book that will appear in the 2016 issue of the Transactions of the Unitarian Historical Society I didn’t mention him in the previous post. William Mellor joined the school in 1900 and went on to Exeter College, Oxford. He was a prefect and a captain of cricket and football. He ended up as editor of the Daily Herald and the Tribune and during the First World War was a conscientious objector. His career was not without significance in the development of the Labour party. William Mellor shared radical socialist views with his brother, the Rev Stanley Mellor, minister at Hope Street Church, Liverpool. William and Stanley were the sons of Rev William Mellor, Unitarian minister at Huddersfield before the First World War. I am grateful to Andrew Mellor, grandson of the William in the photograph below, for this family information.

But one other short passage from the Willaston book stuck in my mind. In the chapter on 1914-1924 short passages illustrating the activities of the Cadets are given, taken from the school magazine, including this one on page 45:

In April 1918, “We have only had one lecture this term; that was a most interesting one from Captain Kitchen, (Old Willastonian) Assistant Instructor at the Command Gas School Aldershot. Besides the description of the uses of gas, various specimens of gas masks displayed, practical demonstrations were given of tear-gas and smoke bombs.”

This must have been R.T. Kitchen who was at the school from 1903 to 1908. The first use of gas by British troops came at the battle of Loos in 1915. It was not a success, the wind blew the gas back into the British trenches. Later in the war the allies also utilised mustard gas. A grim job indeed to be assistant instructor at the Gas Command School.

In one of the many images in the Willaston School Nantwich book there is a picture of the Football XI in 1908 (page 60). There they sit, the first eleven, a confident looking W. Mellor (captain) seated in the centre. To his left is Norman Ebbutt who served in the RNVS throughout the First World War, and who later became The Times correspondent in Berlin until he was expelled by Goebbels. To William Mellor’s right is a young R.T. Kitchen.

The Willaston District History Group are to be congratulated on publishing this fascinating, well-illustrated book.

Willaston School was a relatively short-lived minor public school established under the provisions of the will of Philip Barker, a prominent member of the Unitarian Chapel in Nantwich. On his death in 1898, with no close living relatives, he left his house and estate to be turned into a school for boys of Unitarian families. He may also have intended to provide a service to the sons of Unitarian ministers and also hoped to create a feeder school for Manchester College, Oxford where pupils could go to train for the Unitarian ministry. In this last aim they don’t appear to have been successful, only three ex-pupils went into the Unitarian ministry.

Most of my knowledge of this school previously came from the writings of the late Rev John McLachlan and seeing the war memorial that he had moved to Harris Manchester College after the closure of the school. Founded right at the start of the twentieth century the school seemed to flourish in the decade before the First World War when so many ex-pupils joined up, many lost their lives and a large cohort of their number were decorated for gallantry – including a VC, three MCs, two Albert Medals, one DFC, a DSM and three further mentions in despatches. The VC was awarded posthumously to Philip Hirsch of Leeds. Later Sir Sydney Jones of Liverpool opened a memorial chapel in the school to those who had lost their lives in the war, and a new swimming pool was given in his memory by Philip Hirsch’s parents.

WIllaston School Nantwich is an impressive account of the life of a unique Unitarian educational institution from a vanished age. Based largely on the record of writings by four former pupils, including John McLachlan, the book gives a very full account of all aspects of school life including academic matters, sports, music, drama, excursions, clubs and societies and much more. The book includes a list of all the students and accounts of the lives of those who were killed in the First World War. What makes the book even more interesting is the tremendous selection of photographs taken from a collection of 230 glass lantern slides held at Harris Manchester College which really do give a very full picture of life in the school. The school was only operational from 1900 to 1937 but is clearly well remembered in the locality. After closure it became a Roman Catholic ‘Industrial School’ and later still became an Elim Bible College. But this book is mainly about its Unitarian era and is well worth reading.

It can be obtained from the Willaston District History Group via their website: http://www.willastonweb.co.uk/

Back in August I wrote about the short but significant life of Jeremiah Horrocks (1618-1641) and his connection with the Ancient Chapel of Toxteth. You can read the post here:

Jeremiah Horrocks is interesting for a variety of reasons but it is a curious fact that as a scientist he has collected memorials in at least four churches around the country, including the Ancient Chapel of Toxteth in Liverpool and Westminster Abbey.

As I also mentioned in my last posting on this topic there are a number of other memorials and commemorations of him in different places, all of them dating from long after he lived. One of the most recent and impressive is near the Pier Head in Liverpool. This is an exciting installation, well-sited in front of the Liver Buildings amongst the ever-growing collection of statuary and memorials that is accumulating there.

Entitled Heaven and Earth and created by Andy Plant the work was installed in 2011. The base is inscribed with the words:

Thy return posterity shall witness, years must roll away, but then at length the splendid sight again shall greet our distant children’s eyes

a quotation from Jeremiah Horrocks’ posthumously published book on the transit of Venus.

The work is both a sculpture and an orrery. Andy Plant (http://www.andyplant.co.uk/recent-work/) himself describes Heaven and Earth in these terms:

The sculpture has a working hand powered mechanical orrery, the position of Venus has been replaced by a copper angel version of Jeremiah and as his wings flap he orbits the other planets. Inside the large telescope there is a video animation of the life of Jeremiah by Tim Hunkin. 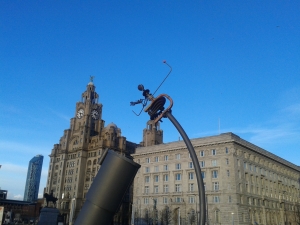 Unfortunately when I visited the sculpture on a crisp January afternoon this year none of these features were working. They may not have been intended to function beyond the time of the original exhibition of which the sculpture formed a part, I don’t know. But Tim Hunkin is something of a genius and it is great to think that some of his work is part of the installation. In fact you can read about how Tim Hunkin created A Short Life of Jeremiah Horrocks and see the animation on his own website here:

Heaven and Earth is another exciting addition to the Liverpool waterfront, and another fitting memorial to a remarkable person.