We have three services online over the Christmas period all of which can be accessed from this post.

Our service for Christmas Eve on Thursday 24th December is filmed in First Dunmurry (NS) Presbyterian Church and conducted by Rev Dr David Steers. The readings include A Visit from St Nicholas, read by Sue Steers, The Oxen by Thomas Hardy and It is a good thing to observe Christmas day by Henry van Dyke. Church organist Allen Yarr plays the carols O Come all ye faithful, O Little Town of Bethlehem and Hark! The Herald Angels Sing. Ballee organist John Strain plays It came upon the midnight clear and Laura Neill plays Jingle Bells on the bagpipes. Special thanks to InkLightning for the Father Christmas artwork.

Our Christmas Day service is filmed in Clough, Ballee and Downpatrick churches. Conducted by Rev Dr David Steers the readings are given by Sophia Cleland (Luke ch.2 v.8-20) and Eve Lightbody (Matthew ch.2 v.1-12). Music includes God rest ye merry gentlemen played on keyboards and sung by Dillon and Haydn Howell; Silent Night played by Laura Neill on the bagpipes and Laura Patterson on the organ of the First Presbyterian (NS) Church, Downpatrick; Mary’s Boy Child; Joy to the World; The First Nowell; Jingle Bells/Christ is born today; When a child is born, all played by John Strain on the organ of Ballee Non-Subscribing Presbyterian Church.

Filmed at Inch Abbey in county Down and conducted by Rev Dr David Steers our service for the last Sunday in 2020 includes as readings Llananno by R.S. Thomas and an extract from My Cathedral: A Vision of Friendship by Alexander Irvine. Jack Steers plays It came upon the midnight clear on the trumpet, Downpatrick organist Laura Patterson plays In the bleak mid-winter, and John Strain plays While shepherds watched their flocks by night and O little town of Bethlehem on the organ at Ballee.

turn down the narrow path

If you can’t get to church on Sunday amidst all the current restrictions or, indeed, if you have been to church but would like to join in another Christmas service, you can click on our video and join in our Service of Carols and Readings.

Filmed partly in Downpatrick it features music played on the organs at Ballee and Downpatrick plus music on the trumpet and bagpipes as well as readers from different churches who re-tell the Christmas story.

O thou eternal Wisdom, whom we partly know and partly do not know;

O thou eternal Justice, whom we partly acknowledge, but never wholly obey;

O thou eternal Love, whom we love a little, but fear to love too much:

Open our minds, that we may understand;

Work in our wills, that we may obey;

Kindle our hearts, that we may love thee. 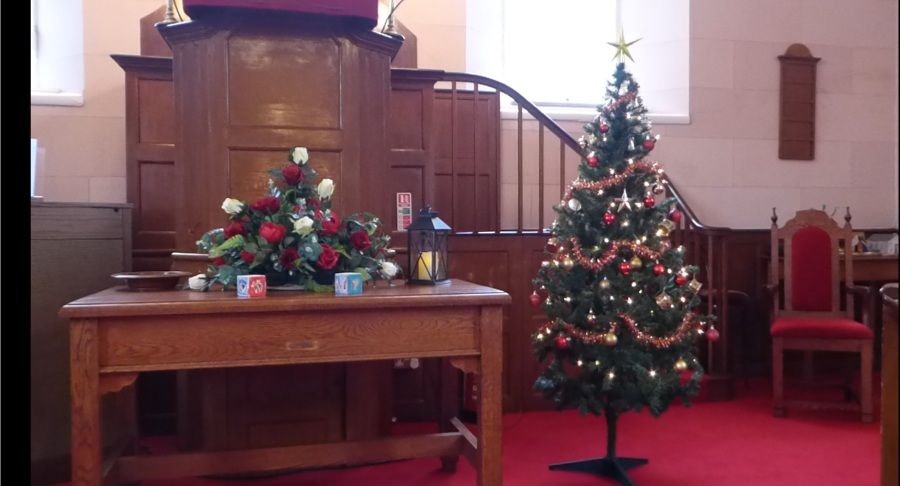 The service for the Third Sunday in Advent is led by the members of the Sunday School at Clough who do a wonderful job of leading our worship in a very special Christmas service. Big thanks goes to Leanne Straney for organising the recordings and making the whole thing possible, and to all the children who have put together such a brilliant service. Thanks also goes to Laura Patterson who accompanies the service on the organ at Downpatrick and plays the hymns Come and join the celebration and Hark! the Herald Angels Sing. You can view the video here:

On Friday, 11th December – the same day as the latest lockdown in Northern Ireland ended – the Presbytery of Antrim installed the Rev Brian Moodie as the new minister of Banbridge Non-Subscribing Presbyterian Church. In the present circumstances the occasion was much more scaled down than usual with no visitors or guests allowed to be present, no hymns, no speeches and no refreshments, but nevertheless it was a considerable achievement on the part of the Presbytery of Antrim and the congregation to arrange for all the necessary steps leading to an installation – candidature, taking the mind of the meeting as well as a full installation service – during a pandemic. We wish the Rev Brian Moodie and the congregation every blessing for the future.

An additional special issue of the Transactions is now on its way to subscribers (new subscribers are also very welcome, if you would like to join go to the Unitarian Historical Society website here).

WILLIAM HAZLITT, JOSEPH PRIESTLEY AND THE ORIGINS OF UNITARIANISM
IN AMERICA
by STEPHEN BURLEY

Dr Stephen Burley’s paper is a radical reassessment of the role of William Hazlitt in the development of Unitarianism in the United States. A difficult man, Hazlitt was a fervent propagandist for Unitarianism whose contribution has frequently been overlooked or downplayed. This article adds a great deal to our understanding of him.

‘STEADFAST THROUGH TROUBLES’: MOUNTPOTTINGER AND THE LAWRENCES
by SANDRA GILPIN

Sandra Gilpin tells a story that weaves together Unitarian life in London, Wales and Belfast in the late nineteenth and early twentieth centuries through the lens of the Lawrence family. Its main focus is Ellen Mary Lawrence who was born in London and who married the Rev William Jenkin Davies. She died at a tragically young age and her memorial forms part of Mountpottinger NSP Church in east Belfast.

Alan Ruston brings together two sides of the life of Helen K. Watts. A ‘stalwart’ Unitarian, well-known in London and Sussex up until her death in 1972. She was also an active suffragette between 1907 to 1911 who was arrested for her campaigning and threatened with force feeding. This remarkable aspect of her life seems to have been forgotten in Unitarian circles and Alan paints a full picture of her life and achievements.

In our Record Section Derek McAuley has used the Freedom of Information Act to uncover hitherto unknown aspects of the life of the Rev Gábor Kereki (1914-1995) who fled Hungary for Britain at the start of the Cold War in 1947. Throughout the rest of his life he made a great contribution to the Unitarian ministry in Britain and this will continue thanks to a substantial legacy left by his wife in 2016. She has established the ‘Gábor Kereki Trust’ to benefit ministers and students of the Hungarian Unitarian Church and enable them to study in the UK.

In our Reviews Derek McAuley begins what must be a long-overdue examination of the role Unitarians played in slavery prior to its abolition in 1833 with his review of Kate Donnington’s brand new book on the Hibbert family. Alan Ruston reviews the important Lindsey Press book Unitarian Women A Legacy of Dissent, edited by Ann Peart, and Andrew Hill reviews a new publication of the diaries of James Losh, a Newcastle Unitarian who observed and recorded detailed changes in nature, the environment and weather in his local area between 1803 and 1833.

Transactions of the Unitarian Historical Society

Our service for the Second Sunday in Advent comes from First Presbyterian (Non-Subscribing) Church, Downpatrick and has as its reading Isaiah ch.64 v.1-9. In that passage God is likened to a potter and through interaction with our Creator we can be remade. This image of the potter at work at the wheel is a very powerful one in the Bible, it is suggestive of the ongoing process of creation of which we are a part.

The video can be seen here:

The organist is John Strain, playing the organ at Ballee Non-Subscribing Presbyterian Church, who plays Lo! He comes with clouds descending (Mission Praise 424) and Hark the glad sound! The saviour comes (Hymns of Faith and Freedom 107).