Towards Third Millennium Christianity Activism, Nonviolence and the Mystical Imperative by Alastair McIntosh

Alastair McIntosh lecturing at Rawtenstall. This photo and the one above courtesy of John Hewerdine

Described by the BBC as ‘one of the world’s leading environmental campaigners’ Alastair McIntosh is a pioneer of modern land reform in Scotland and an honorary fellow of the School of Divinity at Edinburgh University and an honorary professor at Glasgow University. This is a challenging and far-reaching lecture originally given at Rawtenstall Unitarian Church, Lancashire in March 2019 as part of the ‘Future of Faith’ lecture series organised by Unitarians of the Lancashire Collaborative Ministry and Pendle Hill Quakers, supported by the Progressive Christianity Network.

An Appearance of Francis David: A Chautauqua Performance  by Kevin Murphy, Clinical Professor of Medicine at the University of Nevada, Reno

A Chautauqua Performance is the portrayal of an historical figure talking about their lives and views as if they had just appeared from the past. Through it Dr Murphy gives tremendous insight into the life, sufferings and achievements of this neglected figure of the Transylvanian reformation.

What do these stones mean to you? by David Steers, editor Faith and Freedom

The cover picture of the new issue of Faith and Freedom. Rural Toxteth in 1821 showing the Ancient Chapel and the view along Park Road, from an original lithograph by Samuel & George Nicholson

A sermon delivered at the 400th anniversary service of the Ancient Chapel of Toxteth, Liverpool in November 2018. In 1611: At a place called Toxteth Park near Liverpool, there dwelt a wise and Religious People, who being desirous of the good of themselves and their Posterity, intended to erect a School amongst them. A few years later they built a chapel which has continued to be used for worship through four centuries. This sermon celebrates the life and history of the congregation.

International Association for Religious Freedom: Our Vision for the Future

A new statement issued by the International Council, meeting in Tokyo in March 2019.

Marcus Braybrooke, Faiths Together for the Future, The story of the World Congress of Faiths and the growing global interfaith movement to heal the world, (Braybrooke Press)

W. Jamieson, A World in Two Minds, Why we must change our thinking to change our future, (Shepheard-Walwyn)

An annual subscription for each volume (two issues) costs £15.00 (postage included) in the United Kingdom. Single copies can be ordered at a cost of £8.00 each (postage included). Cheques should be made out to Faith and Freedom and sent to the business manager:

Alternatively you can pay via PayPal by clicking here.

On sale in Hungary since 2nd May is this stamp depicting this famous painting of the Diet of Torda. The painting has been very widely reproduced over the last one hundred years, there was, I remember, a print of it in the Unitarian College, Manchester when I was there and I have a Unitarian magic lantern slide of it dating from before the First World War. Needless to say it is not a contemporary image but painted by Hungarian art nouveau painter Aladár Körösfői-Kriesch and first exhibited as part of the Hungarian millennium celebrations in Budapest in 1896. It was part of that flowering of Hungarian culture that turned Budapest into a great modern city at the time of its 1,000th anniversary.

It depicts Francis David in the centre of the picture with King John II Sigismund on the left in red, Giorgio Biandrata stands behind him and other key figures in Transylvania. By tradition the meeting of the diet took place in the Catholic Church – which became Unitarian following the event. The picture now hangs in what is today the museum in Torda which was actually a royal residence in the town in the sixteenth century and may well have been the actual location for the diet to meet. S.A. Steinthal, when he visited Torda in 1859, was not led to believe the church was the venue:

“The house in which the diet met at which this remarkable enactment was made was pointed out to me, and that plain edifice will always remain impressed upon my memory as a spot consecrated by the true spirit of Christianity, manifested long before the world at large was ready to receive its genial spirit of enlightened love.”

There is a very good account in English of the making of the stamp on the Magyar Posta website (https://www.posta.hu/stamps/stamps/new-stamps/the-diet-of-torda-was-held-450-years-ago) which includes the following:

‘Magyar Posta is issuing a commemorative stamp in honour of the 450th anniversary of the proclamation of the Act on Religious Freedom adopted by the Diet of Torda in 1568. Two hundred thousand copies of the commemorative stamp designed by the graphic artist Attila André Elekes were produced by the banknote printing company Pénzjegynyomda…

The Hungarian Unitarian Church dates its establishment as an institution from the proclamation of the Act on Religious Freedom adopted by the Diet of Torda in 1568. The Transylvanian Diet held in Torda (today Turda, Romania) between 6 and 13 January was the first to commit itself to religious diversity, due to which the different branches of Reformation could evolve freely and peaceably into independent churches, making it possible for the four established denominations (Catholic, Reformed, Evangelical-Lutheran and Unitarian) to develop their sectarian system. The Hungarian Unitarian Church declared 2018 as the year of religious freedom and on its initiative the Hungarian Parliament passed Act I of 2018 on the importance of the 1568 Act on Religious Freedom of Torda and the Day of Religious Freedom and made 13 January, the day on which the 1568 religious law was proclaimed, the Day of Religious Freedom.

The celebratory 2018 law is a worthy tribute to the religious law adopted at Torda, which was the first in the world to proclaim one of the fundamental merits of modern democracy, the right to exercise religious freedom. According to the celebratory law’s justification “… The notion of the Torda Act, the religious self-determination of the community, can also be considered as paving the way for modern democracy, which gained universal acknowledgement in western civilisation over the course of history and can deservedly be regarded as one of the basic values of Christian Europe.”

The stamp features a reproduction of an oil painting by Aladár Körösfői-Kriesch, Ferenc Dávid’s Address to the 1568 Diet of Torda. On the occasion of the millennium of the foundation of the Hungarian state, several counties, towns and communities were preparing to erect a memorial of artistic value of local historic figures or outstanding events for posterity. The town of Torda made a community decision to commission a painting that recorded the historic moment of the 1568 Diet, the proclamation of religious tolerance and freedom. The commission to make the artwork was awarded to the painter Aladár Körösfői-Kriesch.’

It is not often that anything representative of Unitarian history is reproduced on a stamp so it is nice to see this image going around the world. I am very grateful to Phil Waldron who kindly gave me this stamp.

I was privileged to be present at the special celebration to mark the 450th anniversary of the Edict of Torda held in Torda, Romania, on Saturday, 13th January. It was a remarkable occasion with three churches filled in the town, the service relayed to a screen in the town square and the event broadcast live on Hungarian television.

The Edict of Torda was the first promulgation of religious toleration in Europe. From the point of view of Western Europe it came at the surprisingly early date of 1568 and took place in Transylvania under the rule of King John II Sigismund, the only Unitarian king in history.

Here I will post some images from the service held in the Catholic Church in Torda, traditionally regarded as the location for the meeting of the Diet of 1568.

Assembling in Torda near the Orthodox Church

Walking up to the Catholic Church

Inside the Church before the service 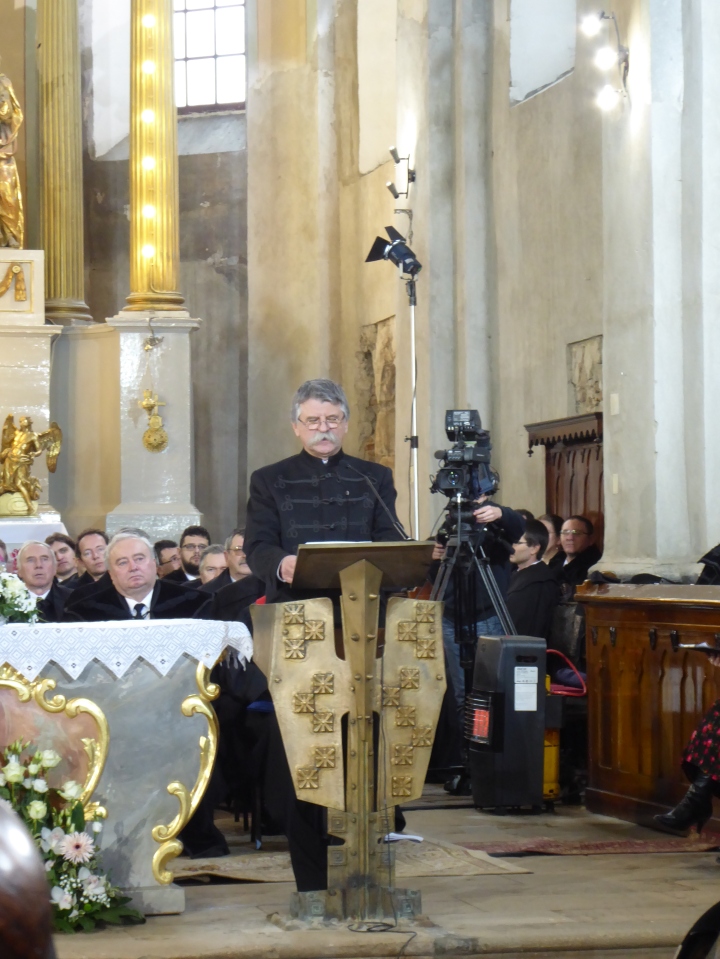 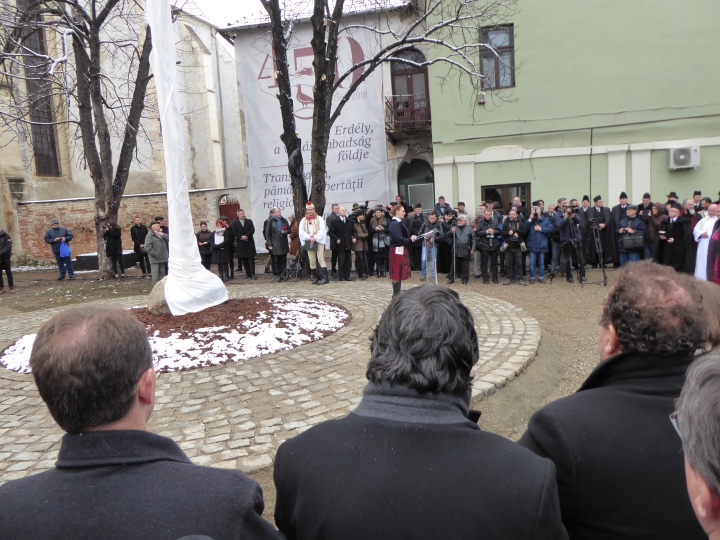 Some of the congregation outside 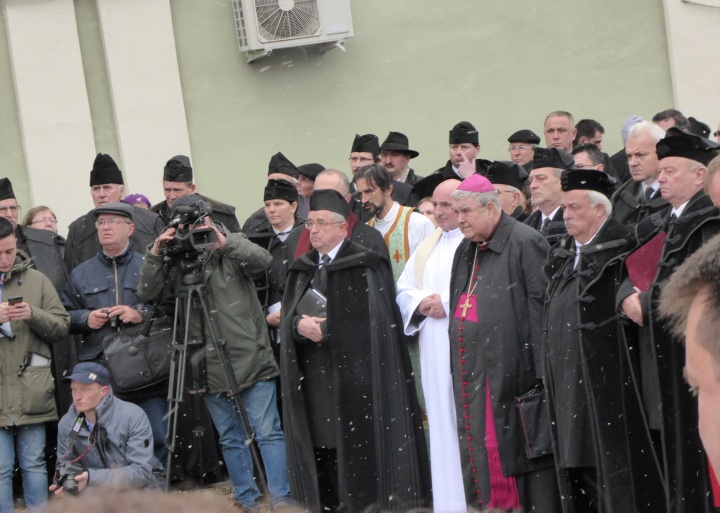 Bishop Ferenc Bálint Benczédi of the Hungarian Unitarian Church, Archbishop György Jakubinyi of the Roman Catholic Church and other dignitaries 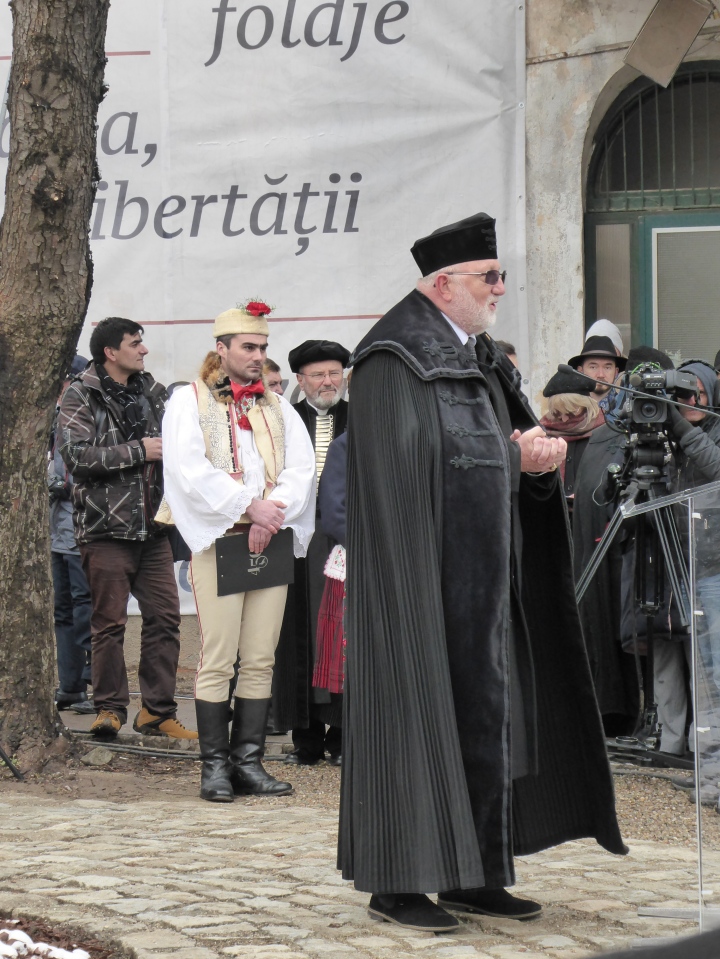