On Saturday, 11th June members of Dunmurry along with members of First Belfast and All Souls’ Non-Subscribing Presbyterian churches enjoyed a great visit to to Dublin. We were made very welcome by the Unitarian congregation on St Stephen’s Green and treated to an excellent tour of sites connected with the roots of Protestant Dissent in Dublin by Rory Delany.

Rory has a fund of knowledge about the history of Dublin and of the different strands of Dissent in the city, which largely date back to the period of Oliver Cromwell. We were taken on a fascinating walk around some of both the familiar and not so familiar parts of Dublin and all of us gained a deep insight into the way Dissent – Independency – Presbyterianism – Unitarianism – developed in the city and the contribution made by members of the Dissenting churches to the history of the city.

Rory gave us an outline of the plan before we set off. The Unitarian Church was built in 1863 by the congregation of Strand Street and four years later it was joined by the congregation of Eustace Street. These two congregations contained many of the leading merchants in the city, families which had played an important part in civic life for decades, and were groups which were rooted in at least four churches which had maintained a continuity of existence from Cromwellian and Puritan times onwards.

Perhaps the most direct stream of religious life which fed in to the modern church on St Stephen’s Green was that of Wood Street. The first minister connected with this congregation is usually said to be John Owen, a leading Puritan divine who came to Dublin as chaplain to Oliver Cromwell and later became dean of Christ Church, Oxford during the Commonwealth. The congregation may date back to Elizabethan times but the first minister in Wood Street itself is thought to be Stephen Charnock who came to Dublin as chaplain to Henry Cromwell in 1655. A fellow of Trinity College, Dublin he was a ‘lecturer’ at St Werburgh’s and returned to England following the Restoration in 1660.

Wood Street was the scene of the ministry of Daniel Williams for approximately 20 years. Welsh-born he moved to London in 1687 and became the leading figure in English Dissent, establishing the library that bears his name to this day. Other distinguished and sometimes controversial ministers to serve this congregation include Joseph Boyse, Thomas Emlyn, John Abernethy and James Duchal (click on the links where shown for more information on this blog) . The congregation moved to Strand Street in 1764.

Samuel Winter, a key figure in Cromwellian Ireland and Provost of Trinity College, was also preacher at St Nicholas’ Church from 1650 and had as colleague from 1656 Samuel Mather, the son of Richard Mather (for more on his family and their connection with Toxteth click here) a leading Puritan in England, New England and Ireland. Samuel Mather was a lecturer at Christ Church and a Fellow of Trinity College. He died in 1671 and was buried in St Nicholas’ Church. He was later succeeded in the ministry by his brother Nathaniel, by which time the congregation had built their own meeting house on New Row.

Eventually New Row moved to Eustace Street in 1728. Nearby was a Quaker meeting-house and Rory told us that one of the Quakers said of the Eustace Street meeting-house that ‘When there is so much vanity without, there won’t be much religion within’. But it is actually a very well-proportioned and elegant building, although eighteenth-century Quakers had their own view of such things. Having said that what survives of Eustace Street today is only the facade and that is not shown off to best effect by the banners hung outside by the Ark Theatre group that use the new building.

It was a wonderful day full of interest and we are all indebted to Rory for sharing his considerable knowledge with us.

The Murland family vault at Clough Non-Subscribing Presbyterian Church will be the focus of a public lecture by Dr Finbar McCormick on the topic of ‘Mausolea & Memorials to the dead in Ireland’ at Clough NSP Church on Wednesday, 13th March 2019 at 7.30 pm. Everyone is welcome and the talk will be followed by refreshments. The tomb is in need of conservation which will be undertaken by the Follies Trust in the forthcoming months.

More information can be found on a previous post here – Mausolea in Downpatrick, Ballee and Clough

The Follies Trust leaflet contains illustrations of the tomb and information on how to make a donation to the project if you wish. It can be downloaded here:

The Faith and Freedom Calendar for 2019 is now winging its way to all individual subscribers around the world. Additional copies can be had for a suggested donation of £5 (all of which goes to the Send a Child to Hucklow Fund). Email Nigel Clarke at faithandfreedom@btinternet.com if you would like to order one.

The Calendar is full of fantastic images celebrating the world of faith and the natural world, each month carrying a large illustration from around the world including Derbyshire Peak District, Northern Ireland (Armagh and Down), Malta (St John’s Co-Cathedral Valletta), Transylvania (Torockó and Bölön), and Macedonia (Lake Ohrid) as well as Graham Bonham’s brilliantly detailed pictures of plants and birds.

There is a scan of the cover at the top of this page, and of the back cover at the bottom and here are some of Graham’s images:

March
Gerbera is a member of the daisy family and was named after Dr Trugott Gerber, an eighteenth-century German botanist and friend of Carl Linnaeus. The plant is native to the tropics and is commonly known as the African daisy. A perennial, it is attractive to insects and birds but resistant to deer. The picture was constructed by combining multiple images focused at different points into a single composite image. 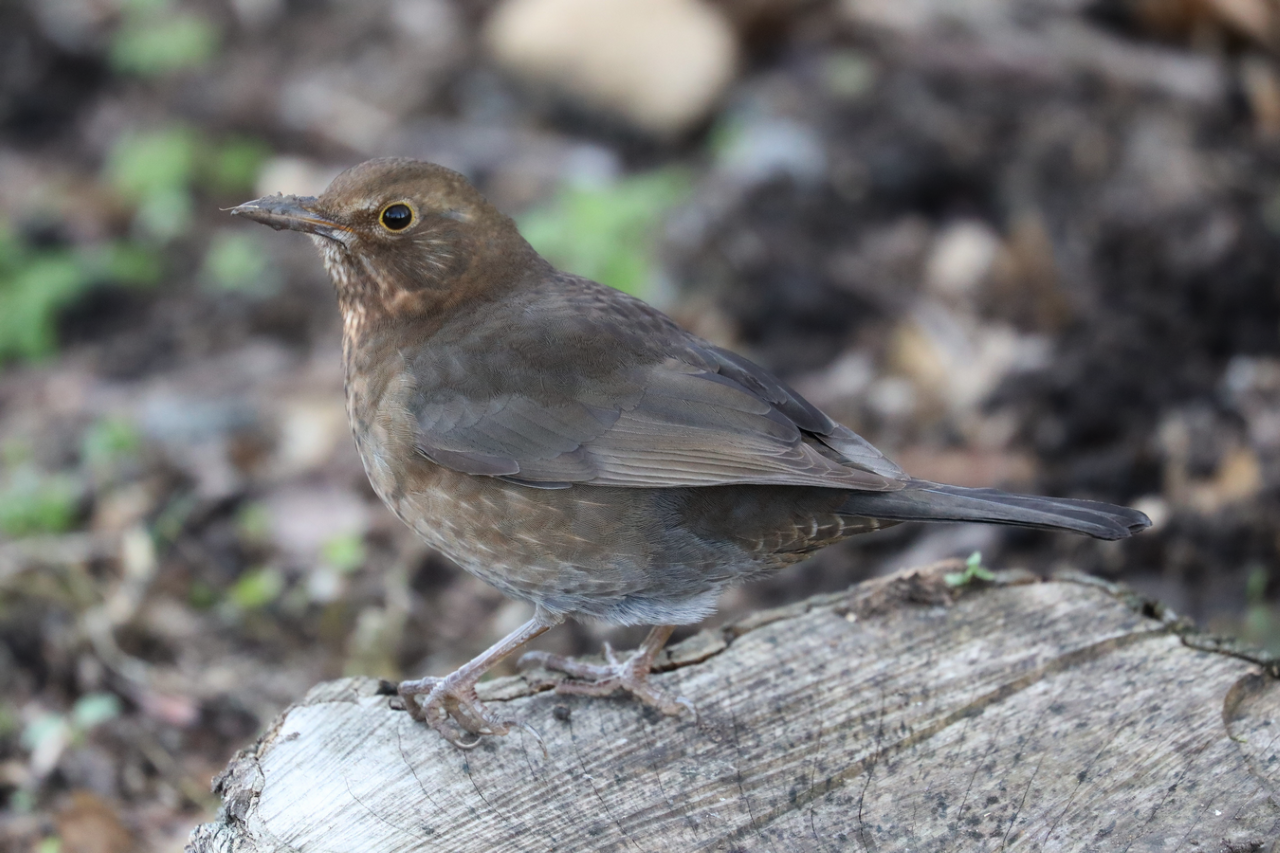 April
The common blackbird is a species of true thrush. RS Thomas’ poem ‘A Blackbird Singing’ cites “a suggestion of dark Places about it.” However it is not normally seen as a symbol of bad luck. In medieval times the trick of placing live birds under a pie crust just before serving may have been the origin of the nursery rhyme. A blackbird also featured on the UK 4d stamp in 1966.

September
The image of the dandelion seed head can be interpreted in many ways, explains Graham Bonham who created the focus-stacked composite image. “It could symbolize transience – the temporariness of existence: there one moment and blown away the next. Alternatively, it could represent fecundity – one bloom produces hundreds of potential new lives – or be about underappreciated beauty: even pesky ‘weeds’, which many people use ‘chemical weapons’ against (to the detriment of the environment), have beautiful aspects.”

This year’s joint Candlelight Carol Service between Clough, Ballee and Downpatrick congregations was held on Wednesday, 12th December at Clough. We were again delighted to welcome the Laganvale Ensemble and their conductor Gareth Downey to lead our worship. The Christmas story was re-told through a succession of readings which were given by readers from each of the churches – Thomas Rooney, Elsie Nelson, Sarah Rooney, Sophia Cleland, Marion Moffett, Jayne Caven, Tierna Kelly, Annabel Cleland, and Mary Stewart. Alfie McClelland played the organ. It was a wonderful evening, the sound of the band filled the church most effectively. 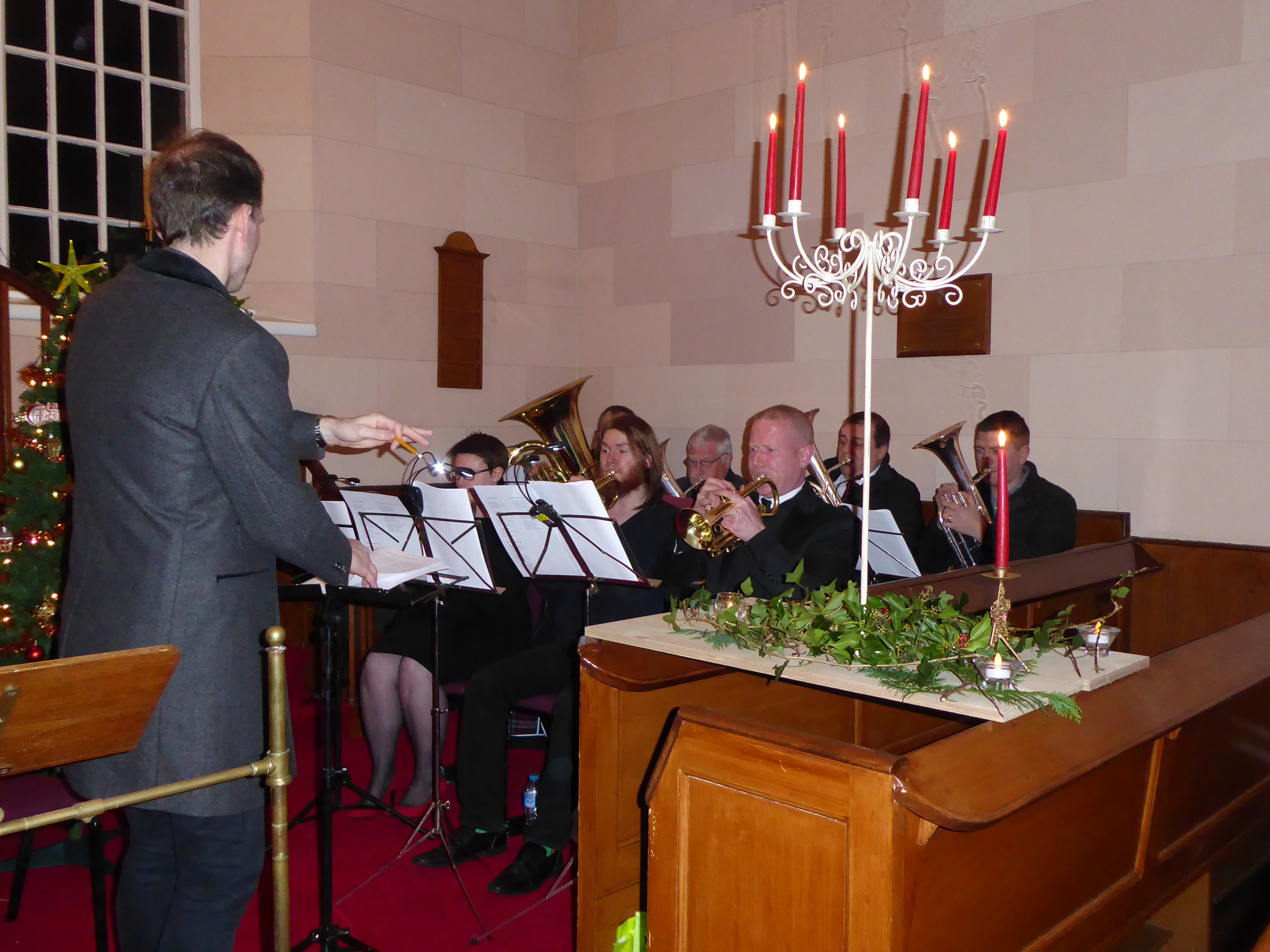 The band playing during the service 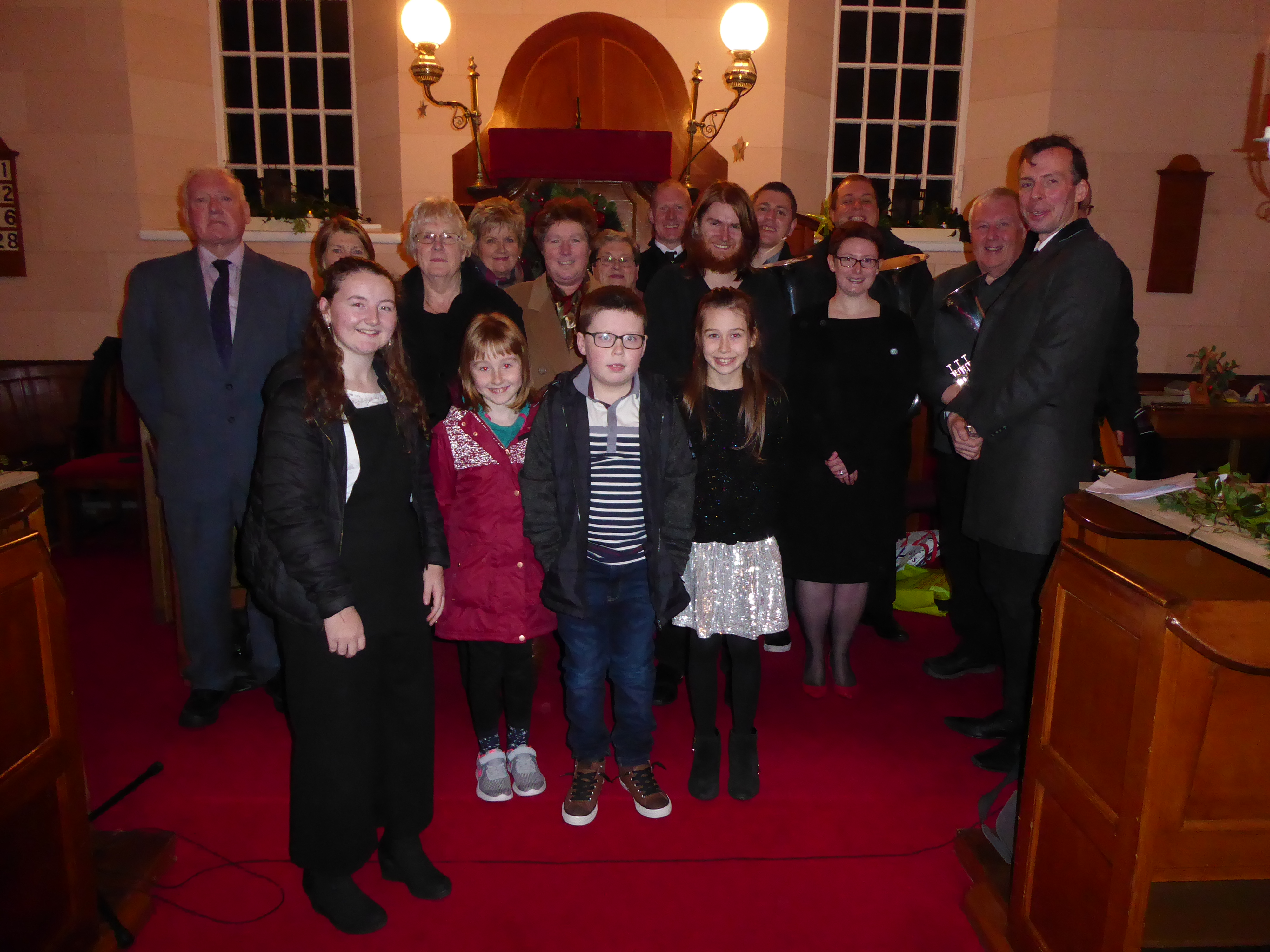 The band rehearsing before the service

The Roll of Honour for the First World War of the Non-Subscribing Presbyterian Church of Ireland is now ready and will be dedicated at the service at Downpatrick on Sunday, 18th November at 3.00 pm.

Everyone is welcome at the service which will also commemorate the centenary of the end of the First World War.

The Roll contains an introduction and two sections. The first is a list, by congregation, of all the men and women, with their service details where known, who are known to have served in the First World War. The second part is an alphabetical list of all those who gave their lives in the Great War. The book runs to 50 pages and everyone who attends the service at Downpatrick will receive a complimentary copy. Thereafter the book will be available for purchase at a cost of £5 (postage not included). All profits from sales of the book will go to the Poppy Appeal and Help for Heroes. 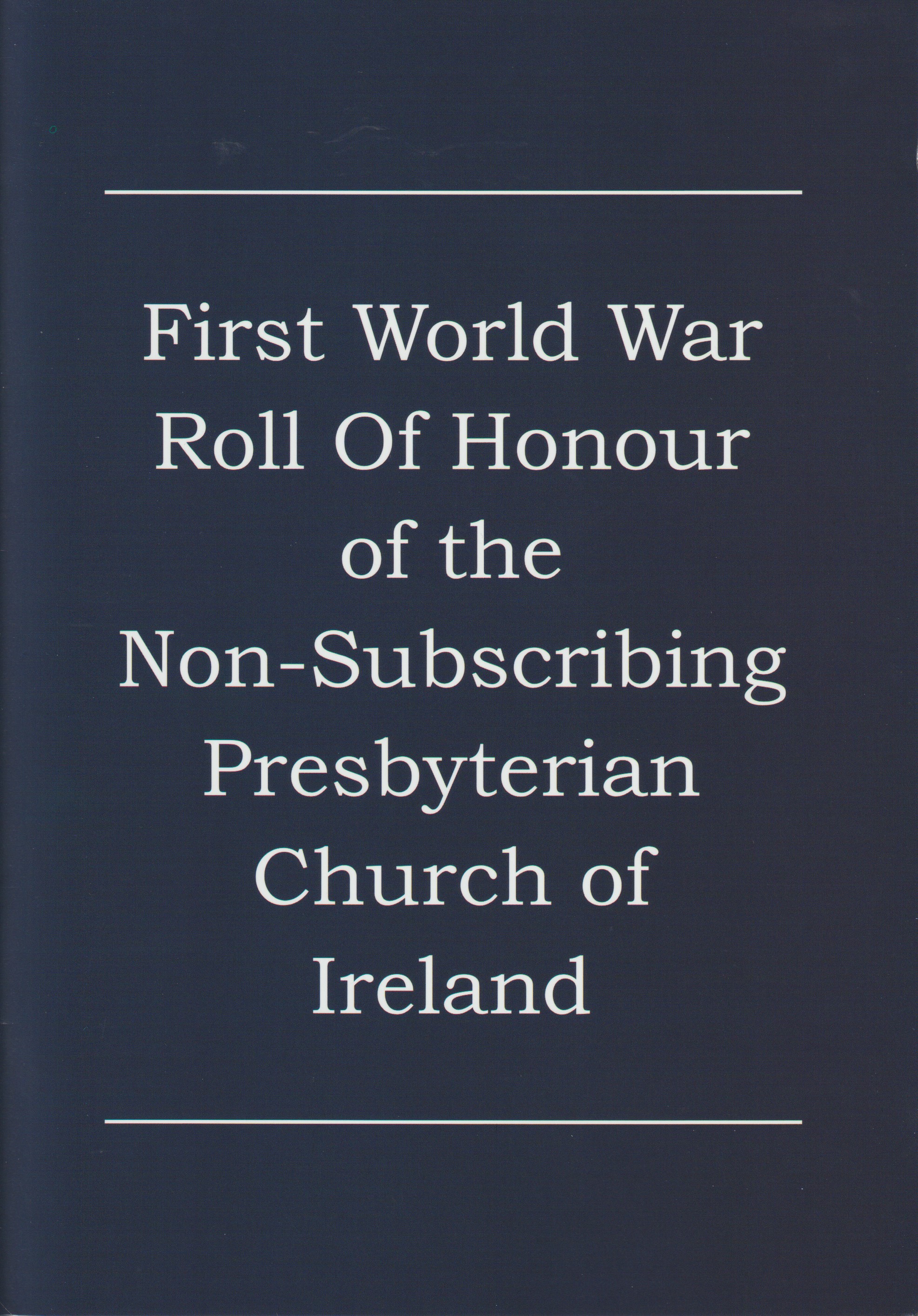 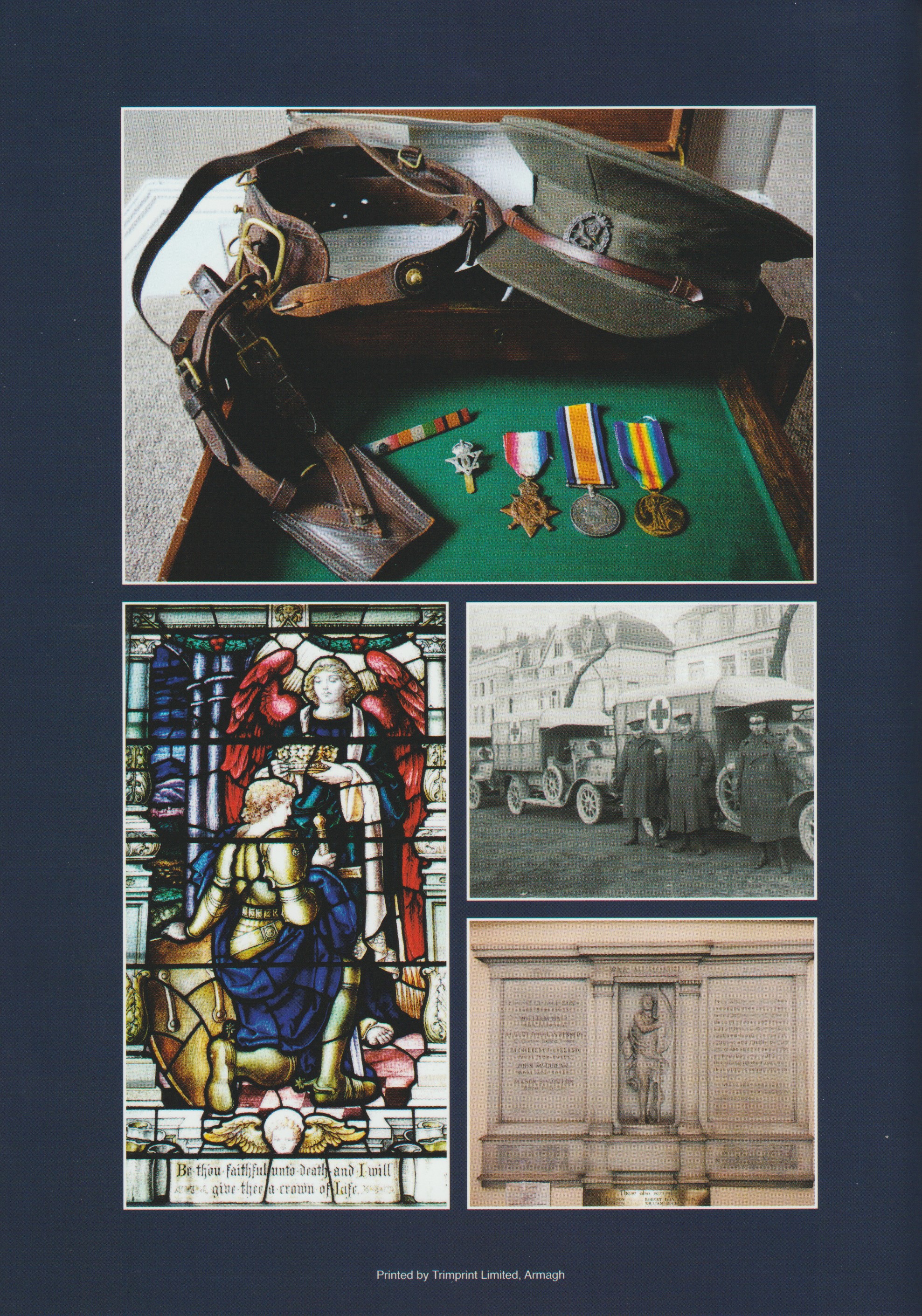 Service to Commemorate the Centenary

of the end of the First World War and

Dedication of the Roll of Honour

in memory of all the men and women of the

who served or gave their lives in the Great War