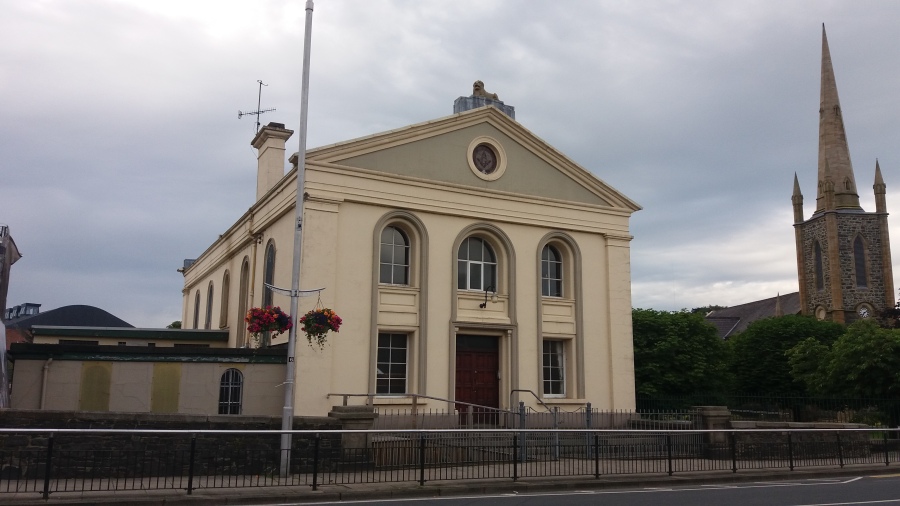 The Non-Subscribing Presbyterian Church in Banbridge has a very fine and impressive building. The congregation recently celebrated its tercentenary and this striking Victorian photograph of the exterior was republished in conjunction with the special service. 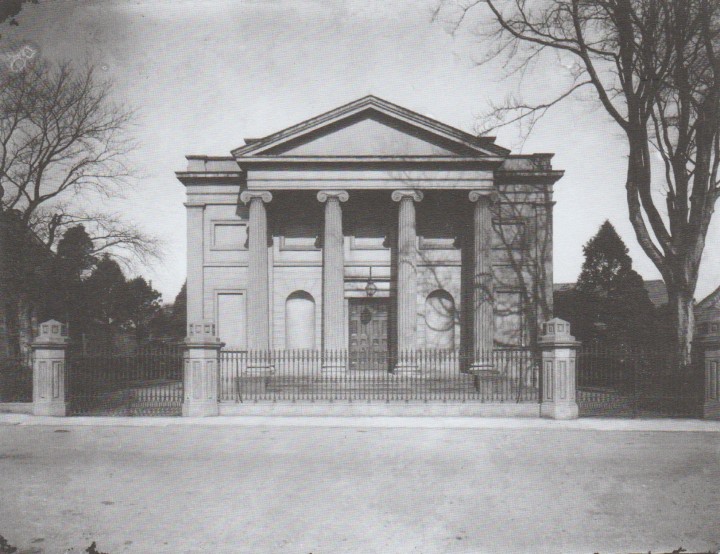 But it is probably not widely known that nearby is the building that once housed the second Non-Subscribing Presbyterian Church in Banbridge. Standing in Church Square as you enter the town it stands opposite the memorial to the polar explorer Captain Francis Rawdon Moira Crozier who died in 1845. This is probably the only memorial anywhere which incorporates polar bears in its design. 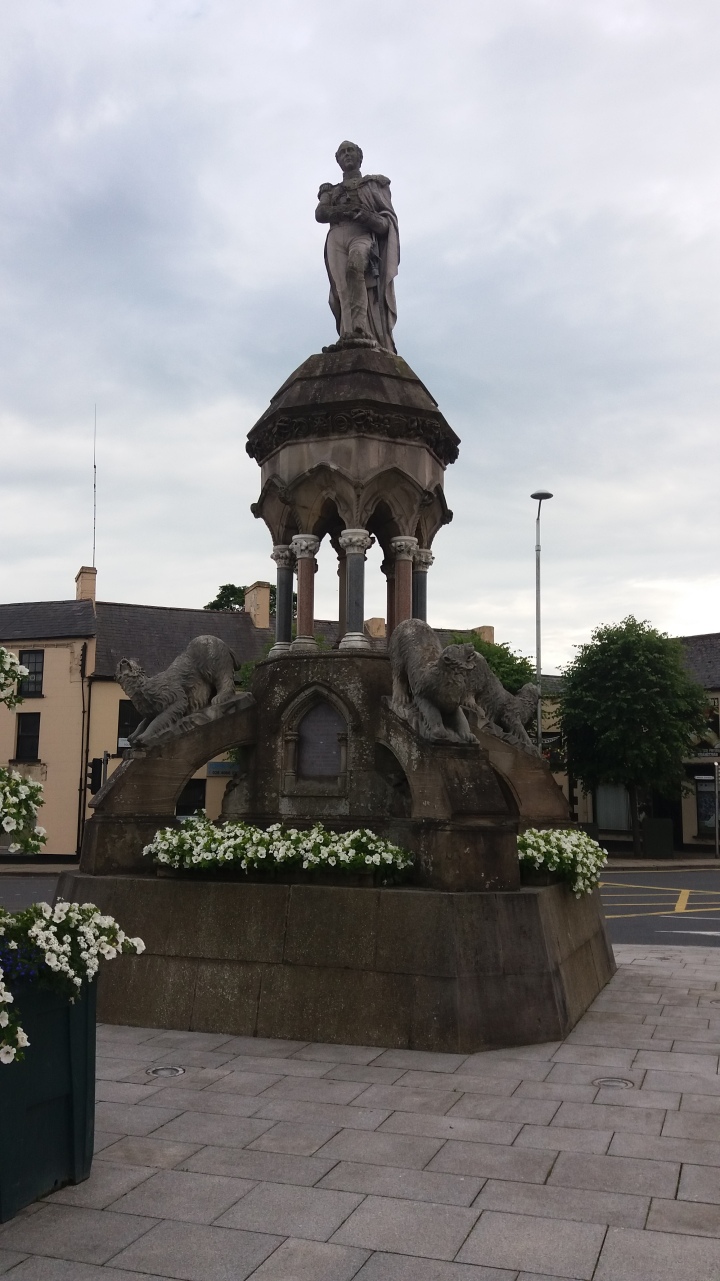 Despite its prominent location the Second Congregation is often overlooked. The Unitarian Heritage: An Architectural Survey published in 1986 is a usually a very reliable guide to church buildings in the Unitarian and Non-Subscribing Presbyterian tradition but the section on Ireland carries no mention of Second Banbridge at all. Indeed it seems to have been very largely forgotten although the size and location of the building suggests it was quite an important congregation in its day. 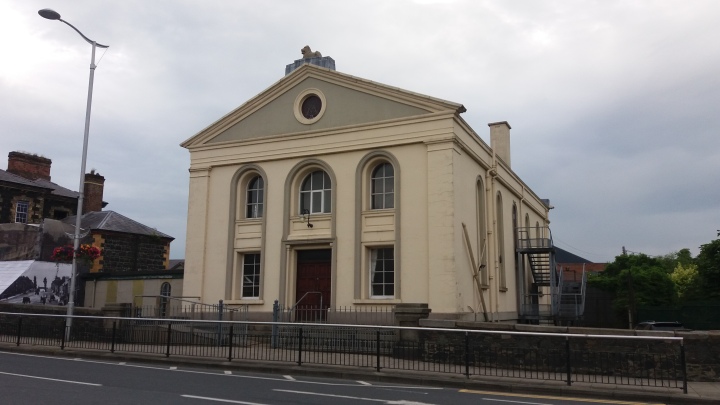 The former meeting house of the Second Congregation

Dryasdust gives an account of the congregation’s history in the Non-Subscribing Presbyterian (April 1995) and tells how it grew out of a dispute over the appointment of the Rev John Montgomery, a nephew of the Rev Henry Montgomery. A minority left and formed a new congregation and called the Rev David Gordon as their minister who was installed on 15th March 1848. The new building was opened sometime after that. 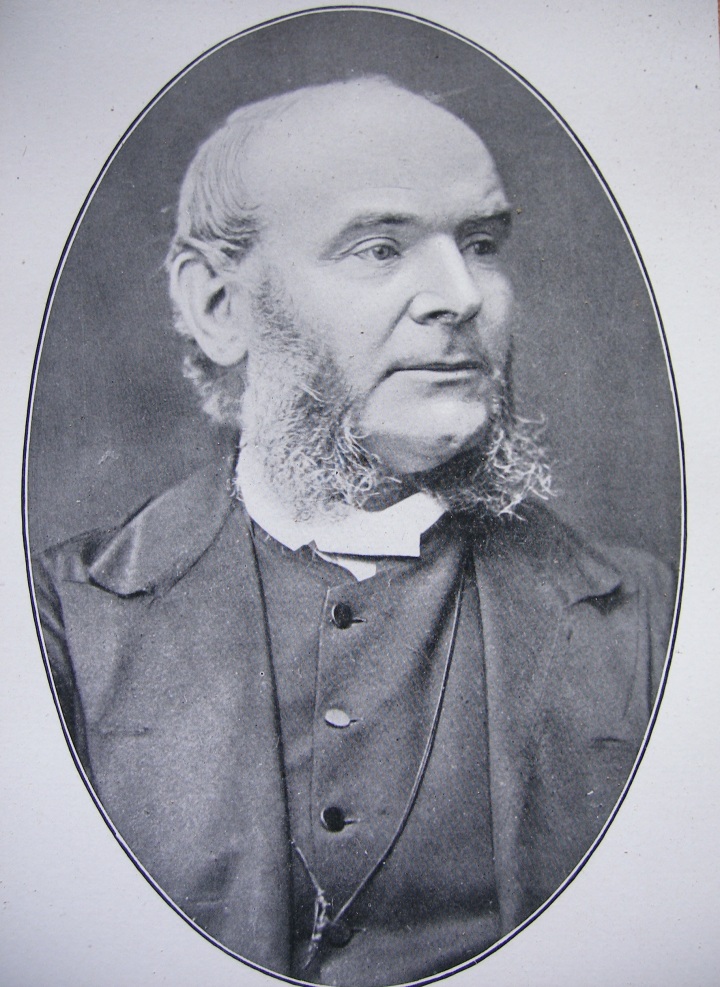 David Gordon remained until 1866, later becoming minister of Downpatrick, but he was succeeded by the Rev Richard Acland Armstrong. R.A. Armstrong ended up as a very distinguished minister of Hope Street Church in Liverpool but he arrived in Banbridge straight from College in 1866. 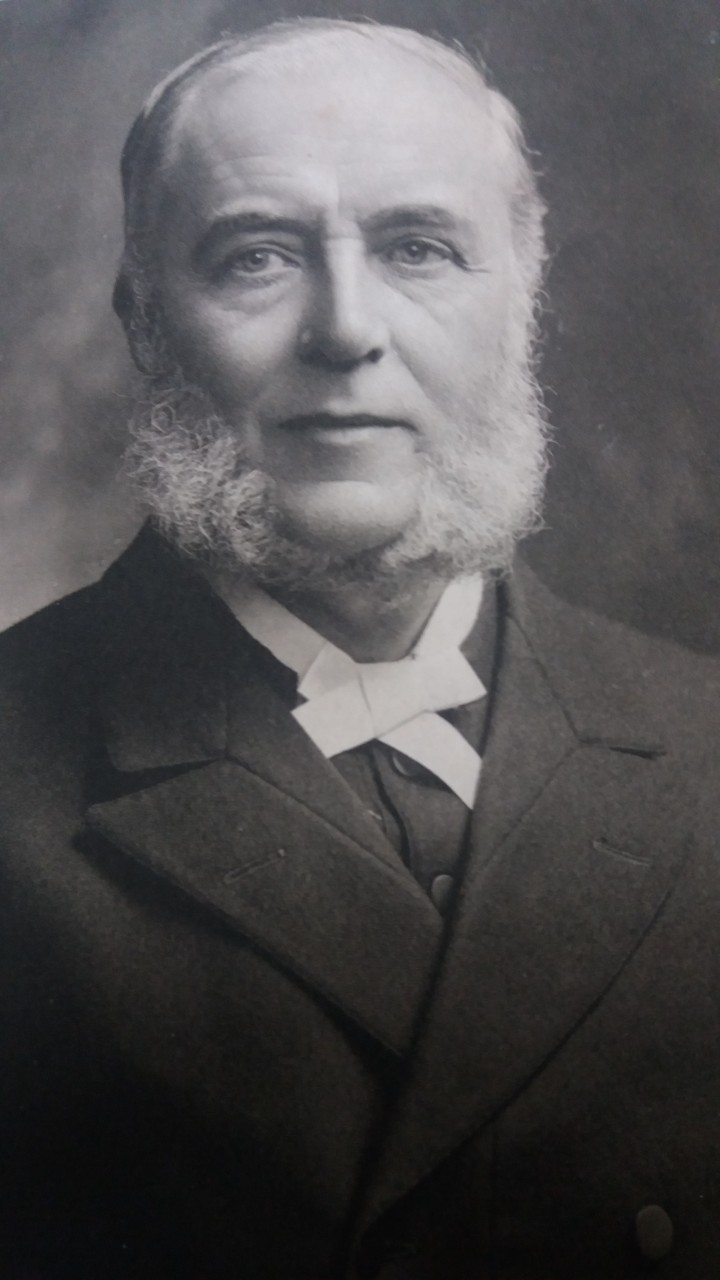 Fortunately for posterity R.A. Armstrong’s son published a Memoir of his father in 1906 which included a number of family reminiscences of his time in Banbridge and this gives us a rare glimpse into the operation of the Second Congregation.

His father, the Rev George Armstrong, had been the Church of Ireland incumbent of Bangor Abbey before becoming a Unitarian and minister of Lewin’s Mead, Bristol. It was perhaps not surprising then that after education at London University and Manchester New College in 1866 Richard received a unanimous call to a congregation in Ireland. His stipend was £125 (including the regium donum) and he lodged with a Mrs Morrow, his kindly landlady who secretly supplemented his paltry allowance of tea. But he did not settle easily in Banbridge. Following the death of the Rev John Montgomery in 1867 he attempted to amalgamate the two congregations, even offering to resign if this would help. But a “Mr Walker”, possibly a leading member of the First Congregation, told him that “there was not the least good [in resigning], and that there was no chance of an amalgamation, as there was a difference of principle between the two congregations”.

He also became deeply embroiled in Ulster politics, being identified as “Papish Armstrong” by hard-line opponents. As sectarian tensions accelerated the windows of the manse were smashed by a mob following the publication of a letter by Armstrong in the Northern Whig in defence of the rights of Roman Catholics. A large mob also intended to attack the meeting house but this was protected by a detachment of police. He also courted theological controversy when answering lectures on the inspiration of the Bible by orthodox clergy with public lectures of his own. These were held in the Town Hall and proved rumbustious affairs. The first one was broken up by a mob with more threats being made against him. The second one took place but was a difficult night. His only supporter on the platform was the Rev John Orr of Comber and the chair was taken by a member of his congregation, Gilbert Mulligan. The opposing side was represented by nine clergy who insisted on having their own second chairman (a Mr Simms) on the platform. The meeting lasted for hours and R.A. Armstrong did not get home until 3.30 in the morning, exhausted and with a sore throat and a fever.

By this time he was also married, to Clara Wicksteed, the sister of Philip Henry Wicksteed, and their son had been born. In a letter to her mother Clara described the attack on the manse:

Baby and I were in bed when they passed our house, between ten and eleven, and they threw great stones at the bedroom window, smashing six panes. I did not feel frightened some way; my great fear was that we should catch cold with the broken window but we did not. I never thought before what a punishment it was to have one’s windows broken. First there is the danger of being hit by the stones (some people were), then of taking cold, then of being cut by the broken glass, then the expense of mending! Tuesday being a fair-day, a great riot was apprehended, so a regiment of soldiers was brought here, as well as still more police. There were attempts at fights between the Catholics and the Orangemen, but the soldiers dispersed them with bayonets.

Our Banbridge people were always kind and loyal. They admired your father, and were proud of him. As he says in one of his letters: “They are doing their best to spoil me there.” They did not always see why he wanted to fight and they would rather have peace, but if their parson wanted to fight, they would back him! ….He always thought of his Banbridge people with affection and gratitude, from the woman who washed for him and brought him presents of eggs, and whose brother once brought a sack of potatoes on his own back for a present, up to Mr Gilbert Mulligan, the chief supporter of the Meeting, and always a most kind friend. He was chairman of your father’s lecture on the Bible. Your father did not know what he was going in for, but Mr Mulligan did – and faced it.

Nowhere in the Memoir does it actually detail what Armstrong said or the issues at stake in Banbridge and in that context the last line quoted from Clara Armstrong’s letter above is quite telling. With this background it is perhaps not surprising that in February 1869 he accepted a Hibbert Trust reading fellowship and with his family left Banbridge. In their farewell address the congregation said:

Whilst we deeply regret the severance of the tie which for upwards of two years has bound you to our congregation and to our hearts, we cannot say that your voluntary resignation of the congregation has taken us by surprise, as you had not been long settled among us before we felt convinced that your talents, acquirements and refinement as a Christian minister would lead to your being invited to some higher and wider field of usefulness.

R.A. Armstrong was succeeded by the Rev John Miskimmin who arrived directly from the Unitarian Home Missionary Board and stayed until 1876 when he moved to Greyabbey. 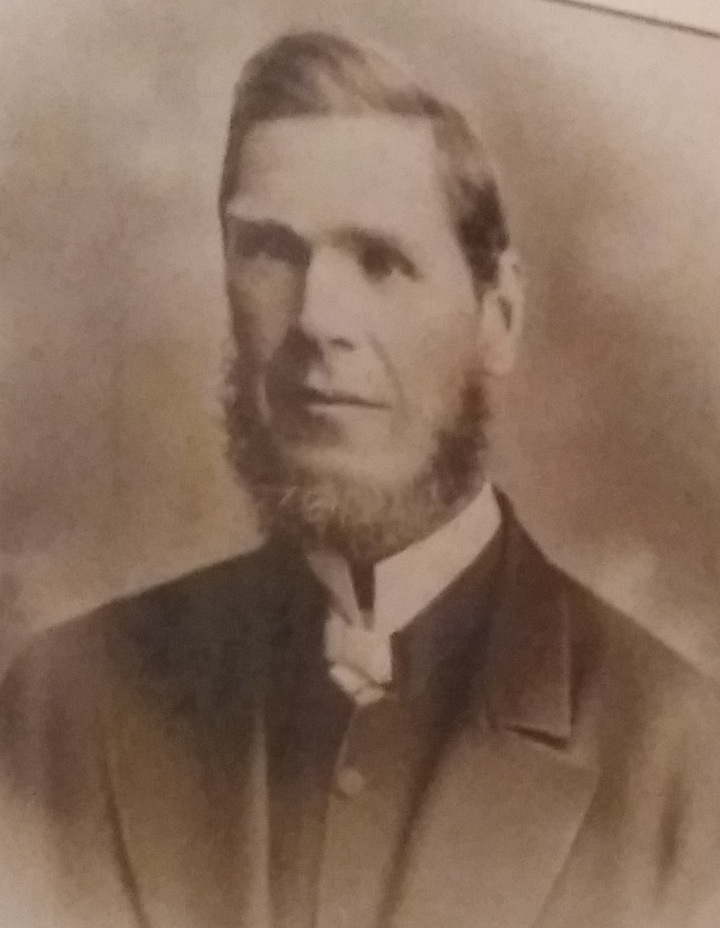 He proved to be the last minister of Second Banbridge, the congregation subsequently closing and selling the meeting house to the Masons in 1893. The building has continued to be used as a Masonic Hall ever since and presumably it was the new owners who put a lion on top of the edifice. So the church closed quite a long time ago but when I was minister of All Souls’ Church in Belfast there was one member whose family had originally come from Banbridge in about 1920, and she certainly regarded her family as identifying themselves with the Second Congregation. But the actual closure of this church took place a very long time ago, although the building is still there to be seen, with a recumbent lion looking down on four polar bears. 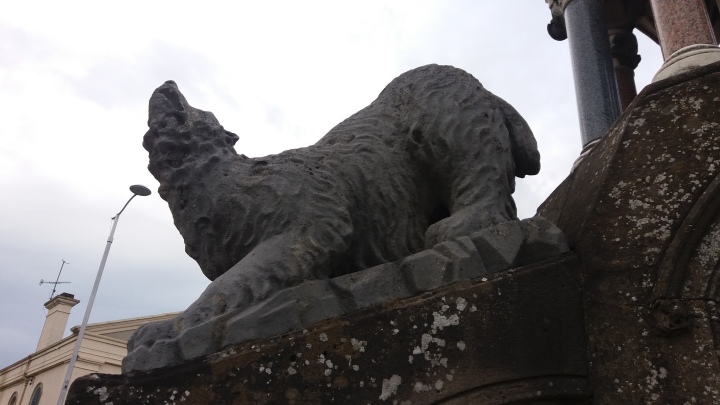