Glen Huntley has posted another fascinating and informative piece on his blog, this time about three houses which once stood close to the Ancient Chapel of Toxteth. These are Elm House, Chapelville and Cooper’s Folly. All three houses long disappeared to make way for the Victorian Tram Sheds and the later twentieth-century extension. The Tram Sheds themselves were demolished in 1993. But you can read Glen Huntley’s excellent post here:

William Roscoe, the famous Unitarian and abolitionist is believed to have lived at Elm House, although his connection with this particular house doesn’t seem to have been proved conclusively. The ‘Dingle’ was the inspiration for one of his poems and he certainly did live locally at one point. He was definitely a member of the Ancient Chapel as well, I have the original ‘call’ issued to the Rev John Porter in 1827 and it includes William Roscoe’s signature.

The image is fully zoomable and gives some remarkable detail of the city in the middle of the nineteenth century. The city without the cathedrals, the Liver Buildings and some other landmarks has a different look to it and it is not always easy to find your way about. However, Glen has found the Ancient Chapel and Elm House, Chapelville and Cooper’s Folly and includes an annotated close up of that part of the picture similar to this one: 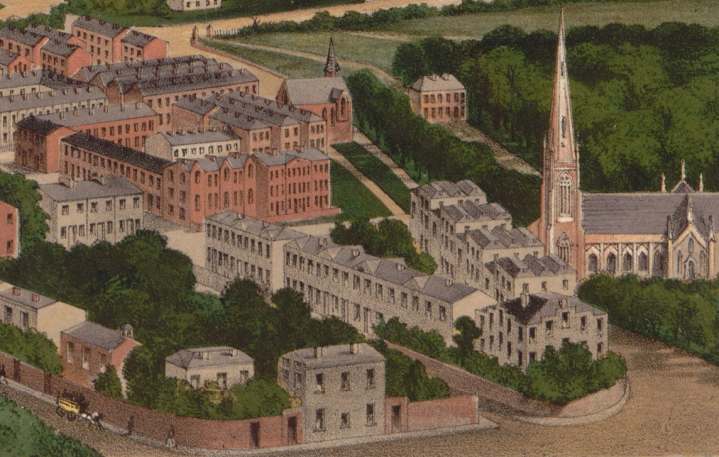 The tall church on the right is St Paul’s Church which is another place I intend to return to on this blog at some point. (The Ancient Chapel can be seen in the bottom left hand corner behind the stage coach).

But looking at the map I discovered another group of churches in Liverpool which must be a unique image of some long-lost buildings.

If you zoom in to the centre of the picture (and it is amazing how much detail can be uncovered there) you get this view: 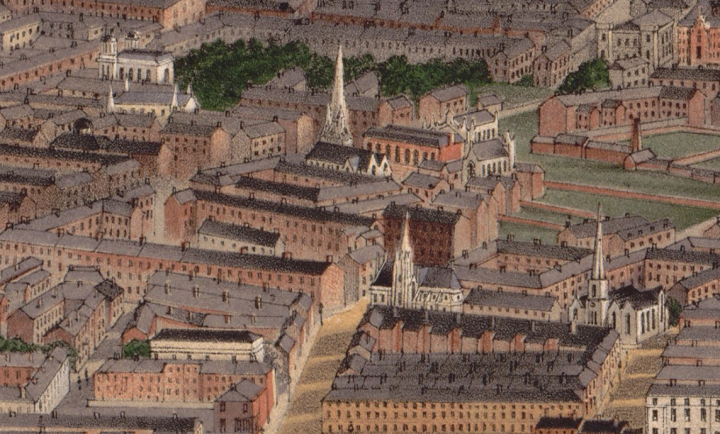 It’s interesting because it shows a collection of now almost all vanished churches still clean and complete: unstained by the smoke and pollution that would gradually turn their stone work black and still with their towers and steeples.

At the centre of this scene is Hope Street Unitarian Church. Once the church of James Martineau and demolished in the 1960s. I blogged about Hope Street on a number of occasions but primarily here:

and according to the statistics one of the most frequently read pages on this blog.

Behind Hope Street you can see Myrtle Street Baptist Church, the church of Hugh Stowell Brown (soon to be the subject of a new biography). I have written about that church here:

and again it is interesting to see a church looking clean and bright when every photograph of it shows it as black and grimy. The same is true of Canning Street Presbyterian Church in the bottom right hand corner of the image, also demolished in the 1960s and now the site of a modern German Church. To the left of this church is the Catholic Apostolic Church, still with its tower in place, a remarkable building, burnt down in the 1980s.

The long building without a tower in the bottom left corner is St Bride’s Church of England, still there today. St Bride’s can be seen in a rare film of 1901 on the BFI Player. Although the church is not identified it clearly is St Bride’s:

In the top left hand corner you can see Rodney Street Church of Scotland, a building saved from destruction but now flats, and just in front is St Philip’s Church Hardman Street, a ‘cast iron’ church like St Michael’s in the Hamlet which disappeared inside another building in 1882 only to be partly uncovered again when that building was knocked down in 2017! You can read about that remarkable discovery on this very interesting blog:

But seven accurate looking representations of different churches, only two of which still exist, taken from a hot air balloon in 1859.