Lots of towns now have heritage trails and in many places in Northern Ireland Non-Subscribing Presbyterian churches feature on the itinerary. Not so long ago I was interested to pick up a copy of the Antrim Town Heritage Trail published by Antrim Borough Council. Here I found a reference to the original Antrim congregation. Although the building closed for worship in the 1970s it dates back to the year 1700 and so it was no surprise to see it featuring as part of the town’s heritage. What was surprising though was the building that featured next to it on the list. You could be forgiven for overlooking this because it is known locally, and named in the text, as ‘Castle Puff’. Yet this was apparently, at one time at least, the manse for the NSP church. The blurb went on:

This is an imposing three-storey building which was built as the manse for the nearby Non-Subscribing Presbyterian Church. Guests who were not quite elegant enough to stay at Antrim Castle were lodged at the manse. In the opinion of the townsfolk, they were sufficiently puffed-up to lodge at the ostentatious Castle Puff.

There was no picture in the printed trail and so I went to have a look at the building. It certainly is one of the most imposing buildings in the whole area. But despite being the only three storey building in the locality it is still quite easy to miss because of the horrendous modern frontages that occupy street level. It is also unusual because it is not often that you see a manse that is actually bigger than the church but this building towers over the low rise meeting house. What one is to make of the claim that surplus guests at Antrim Castle were housed in the manse is anyone’s guess. It is not obvious why Lord Masserene should need to use the manse, even for the most pretentious of his potential house guests, nor why the unfortunate minister should be saddled with them! But it is fascinating to think of such a place being home to the minister and his family.

I don’t know when it was built or when it ceased to be used as the manse. A bit of searching on the internet reveals an undated but probably late nineteenth-century picture of the house being used for commercial purposes. The main entrance was situated under a porch supported by two substantial columns. These seem to have gone now but if you peer through the door of the taxi office you can see through to a light and airy hall and a substantial staircase.

The building has fallen on hard times now. The glory has long since departed. But here, once upon a time, erudite sermons were penned by the thoughtful minister in his well-stocked study; the staircase clattered with the sounds of the children of the manse; respectful servants moved about the building doing the bidding of the minister and his lady and – apparently – pretentious but insufficiently elegant surplus guests from Antrim Castle turned up for the weekend from time to time. If you are so minded you can still hear echoes of a Non-Subscribing past when you go in search of them. 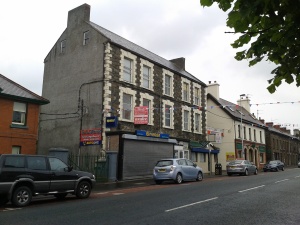 8 thoughts on “A Vestige of Protestant Dissent – in Antrim town”