I wonder how many Unitarian churches have their images engraved on the reverse of a coin? I only know of one example, it is not a particularly beautiful example of the medallist’s art but it is very interesting and tells an unusual tale.

The church in question is Paradise Street Chapel in Liverpool, now long demolished, indeed the whole street has disappeared under the shopping development known today as Liverpool One. But Paradise Street was built in 1791 and was a dissenting church of some importance in Liverpool at the time. In the nineteenth century no less a person than James Martineau became the minister – a fitting appointment to a congregation that was cultured, wealthy and influential. They had built their meeting house on the grand scale, with a central cupola it was octagonal with a classical frontage and adorned with elegant stone urns along the balustrade. Martineau arrived in 1832 and established a name for himself as a preacher, teacher and philosopher linking up with other prominent figures in Liverpool and the north west including John Hamilton Thom, Charles Wicksteed, and John James Tayler.

But partly through the changing environment around the old chapel, which had become more commercially orientated and less like an area the well-to-do might want to visit, and partly also because of the more devotional worship that Martineau introduced, the congregation felt a need to abandon their old church and build something new. Accordingly a grand gothic church was built on Hope Street and Martineau and his congregation departed to their new home, selling the old place off. (For Hope Street Church see my earlier post – the Church on Hope Street).
James Martineau and his congregation, perhaps out of financial necessity from building anew on an extravagant scale, showed little sentimentality in disposing of their old place of worship. Yet one can’t help suspecting that a man of such high-brow intellectual tastes as Martineau can hardly have approved of the new use to which the old chapel was now put. It was purchased by a man called Joseph Heath who intended to turn it into a music hall.
After the Unitarians left it in 1849 the spacious chapel, with its well-constructed gallery all built of the finest materials and to the highest standards, was converted into the Royal Colosseum Theatre and Music Hall. The pews were re-used for seating and one can see how a large chapel could easily be adapted for use as a theatre. However, Joseph Heath must have been an ingenious individual because he managed to turn Paradise Street into the first multiplex: there were twin auditoria for both a theatre and a music hall. According to The Liverpool Stage by Harold Ackroyd the theatre “presented what were described as full blooded dramatic plays for a patronage of mariners”, while the front part of the old chapel was converted into a music hall where variety performances were put on “well suited to the taste of those for whom Mr. Heath catered.”

One can’t imagine Martineau really approving of such an undignified end to his old church but there was greater indignity to come. The Colly, as it became known, was reputedly haunted, an association encouraged by the continuing presence of the chapel’s graveyard around the building. This also presented a practical advantage to the thespians. According to Harold Ackroyd again:
…there was never any shortage of a skull during a performance of Hamlet. These were easily obtained, the artists’ dressing room, below the stage, formerly having been a grave vault, the artist had only to put his hand through an opening in the thin dividing wall, to seize hold of the grisly relic, as did Hamlet.
So it was the music hall owners who had the coin engraved with the unmistakable likeness of the Paradise Street Chapel. The Heath family owned the former chapel until about 1895 although it went through a number of refurbishments and changes of name in that time. But it remained known as the Royal Colosseum Theatre until 1875 at which time it was being run by Thomas Theodore Heath, Joseph’s son. Presumably this is the ‘T. Heath’ whose name is inscribed on the coin as the owner of the theatre. This would date the coin to the early 1870s when it functioned as an admission token for those eager for Victorian melodrama or the bawdy delights of an evening at the music hall. On the other side of the coin is a Liver bird, a belt and the name of the theatre. Some examples of the coins have a large letter ‘H’ stamped on them. I don’t know precisely what this indicated, at first I thought it was a reference to a seat or a row or an entrance but ‘H’ seems to be the only letter used in this way and it rather spoils the look of the engraving. Whatever meaning it had to the person at the theatre door this is now long forgotten.

By the late 1870s the theatre was said to be able hold 3,000 people, and must have been returned to a single auditorium, but at this stage in its history it was struck by a terrible tragedy. On the night of 11th October 1878, during a performance before a full house, a portion of the ceiling fell onto the pit and caused panic amongst the audience. Thirty-seven people were killed in the crush to escape and many more injured. Pictures in the Illustrated London News at the time show a building that was already extensively remodelled from the one that appears on the back of the token but it had fallen victim to the sort of tragedy that was not unknown in Victorian Britain. Following this the theatre was rebuilt, frequently renamed and continued in use up to the First World War. By then known as Kelly’s Theatre, it finally closed its doors in October 1916 and was sold to Cooper’s Ltd who used it as a warehouse for their greengrocery and restaurant business. 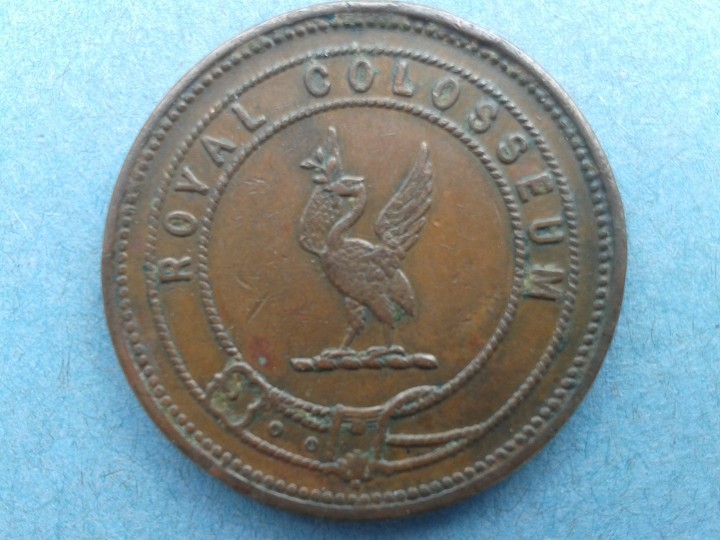 The whole story of Paradise Street Chapel and the Royal Colosseum Theatre was brought to a close by a German bomb during the blitz of 1941. Precisely how much of the building of 1791 had survived within the much enlarged edifice is hard to know but by then the building’s origins as a place of worship were hardly remembered. The link is maintained though by these little tokens which record a small element of theatre history and, almost by accident, help to preserve the image of a building that had a quite different history and purpose.