Back in August I wrote about the short but significant life of Jeremiah Horrocks (1618-1641) and his connection with the Ancient Chapel of Toxteth. You can read the post here:

Jeremiah Horrocks is interesting for a variety of reasons but it is a curious fact that as a scientist he has collected memorials in at least four churches around the country, including the Ancient Chapel of Toxteth in Liverpool and Westminster Abbey.

As I also mentioned in my last posting on this topic there are a number of other memorials and commemorations of him in different places, all of them dating from long after he lived. One of the most recent and impressive is near the Pier Head in Liverpool. This is an exciting installation, well-sited in front of the Liver Buildings amongst the ever-growing collection of statuary and memorials that is accumulating there.

Entitled Heaven and Earth and created by Andy Plant the work was installed in 2011. The base is inscribed with the words:

Thy return posterity shall witness, years must roll away, but then at length the splendid sight again shall greet our distant children’s eyes

a quotation from Jeremiah Horrocks’ posthumously published book on the transit of Venus. 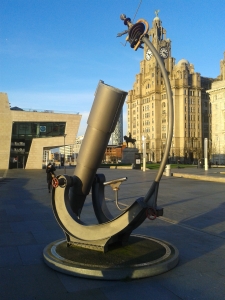 The work is both a sculpture and an orrery. Andy Plant (http://www.andyplant.co.uk/recent-work/) himself describes Heaven and Earth in these terms:

The sculpture has a working hand powered mechanical orrery, the position of Venus has been replaced by a copper angel version of Jeremiah and as his wings flap he orbits the other planets. Inside the large telescope there is a video animation of the life of Jeremiah by Tim Hunkin.

Unfortunately when I visited the sculpture on a crisp January afternoon this year none of these features were working. They may not have been intended to function beyond the time of the original exhibition of which the sculpture formed a part, I don’t know. But Tim Hunkin is something of a genius and it is great to think that some of his work is part of the installation. In fact you can read about how Tim Hunkin created A Short Life of Jeremiah Horrocks and see the animation on his own website here:

Heaven and Earth is another exciting addition to the Liverpool waterfront, and another fitting memorial to a remarkable person. 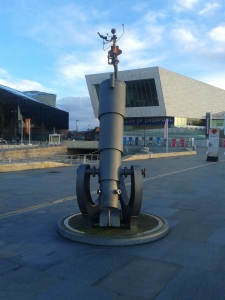 3 thoughts on “Thy return posterity shall witness, years must roll away, but then at length the splendid sight again shall greet our distant children’s eyes”