At the annual service of harvest thanksgiving at Downpatrick on Sunday, 2nd October we also launched a colour leaflet that commemorates the sacrifice of the three members of the congregation who were killed in the First World War. This has been carefully put together by Mary Stewart, the church secretary, and includes pictures of two of the men as well photographs of the various graveyards and memorials in which they are commemorated.

Of the three who were killed one – Captain Craig Nelson – was a professional soldier from long before the war. Craig Nelson was the grandson of the minister of the church, the Rev S.C. Nelson, and had joined the Royal Irish Rifles and served in the Boer War before transferring to the Indian Army. He was an officer of the 3rd Brahman regiment and attached to the 69th Punjabis when he was killed on the western front on 25th September 1915.

All three men are recorded on the church war memorial, however, the name only of Captain Nelson is inscribed on the town memorial and it seems very strange that the names of the other two were never added since they were both born and lived in Downpatrick before their war service.

At the harvest service two windows were decorated to commemorate those who served in the First World War with memorabilia being provided by members of the congregation and also including the commemorative certificates issued by the Commonwealth War Graves Commission for the three members who were killed. Most of the men who joined up in the locality would have served in the 36th (Ulster) Division, but in this case of those who died in the congregation one soldier (John Hayes) was with the Ulster Division, one (Craig Nelson) with the 7th (Meerut) Division of the Indian Expeditionary Force and one (Francis McMurray) was with the 16th (Irish) Division.

John Hayes’s niece Thelma Lowry is a member of the church and she kindly provided the photograph of her uncle for the leaflet and loaned a ceramic poppy which had been part of the notable art installation at the Tower of London in 2014 – Blood Swept Lands and Seas of Red.

We don’t have a picture of Sergeant McMurray and would be very pleased to hear from anyone who is related to him or who has a picture of him.

The Downpatrick leaflet will also be uploaded to the Faith and Freedom Great War Project which can be seen here:

Copies of the leaflet are available in the church. 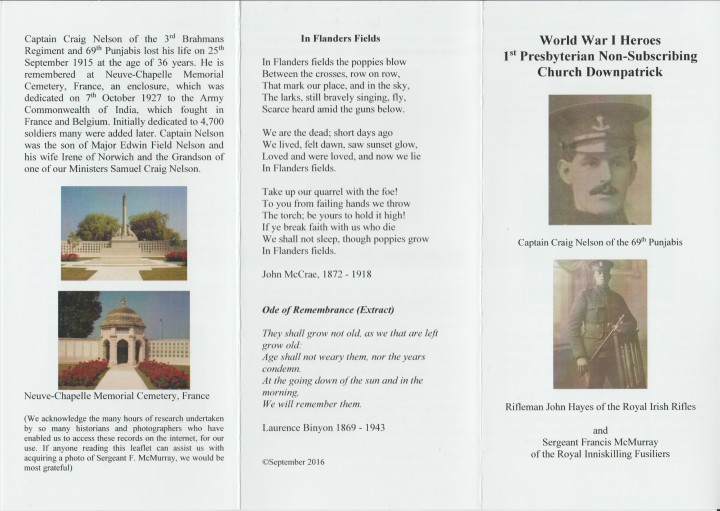