As the congregation was preparing for the Harvest Thanksgiving service at Downpatrick on 2nd October some members turned over an old grave stone that had lain face down for as long as anybody could remember. Indeed it had fallen such a long time ago that there was no record of the inscription. Having lain flat to the ground for so long it was not a surprise to see how crisp and sharp the lettering appeared when it was turned over. However, what was surprising was to see that the stone’s inscription included a long quotation in Greek.

Made by Hastings the local stonemasons who had crafted many of the gravestones in the locality it was a good example of their art. They can’t have been called upon very often to execute inscriptions in the Greek alphabet but they certainly weren’t daunted by the challenge. The Greek letters were as sharp and precise as the rest.

It is the grave of Mary Ann McNea (1820-1884) who was clearly a devoted and much loved servant of the Nelson family. The Nelsons were a highly scholarly ministerial family. James Nelson had been minister at Downpatrick from 1792 to l838 and kept a classical school in the town. His father, Moses Ne(i)lson, had founded the famous Rademon Academy and many of his descendants had entered the ministry. James’s son Samuel Craig Nelson joined his father as minister in Downpatick in 1835 and remained for the rest of his life until he died in 1891

Mary herself could have spent 50 years in the service of the family. In the nineteenth century domestic service accounted for a very large proportion of the working population. She could have been with them from a very young age and when she died they added a verse from Philemon to her memorial:

I would take the Greek to mean something like “more than a servant, a beloved brother [sister]”. 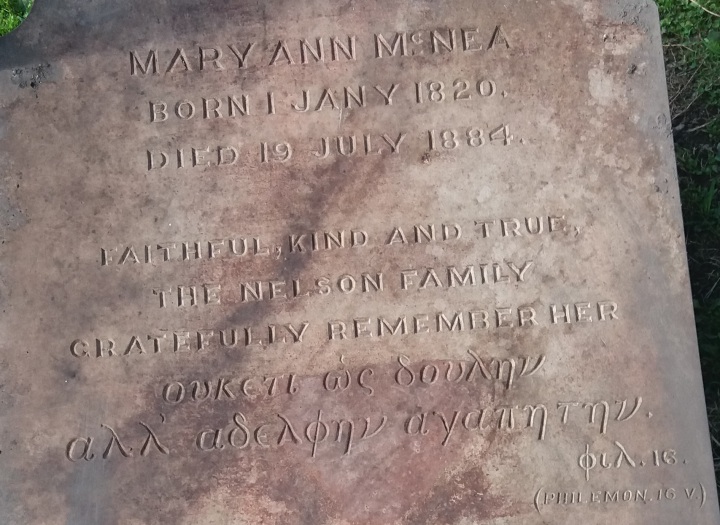 Clearly remembered fondly and honoured by a scholarly family, the wording of their tribute in the language of the New Testament was hidden for many decades but was brought to light again on the day after the feast day of St Jerome, Eusebius Hieronymus, the person responsible for translating the Bible into Latin, and the patron saint of translators.