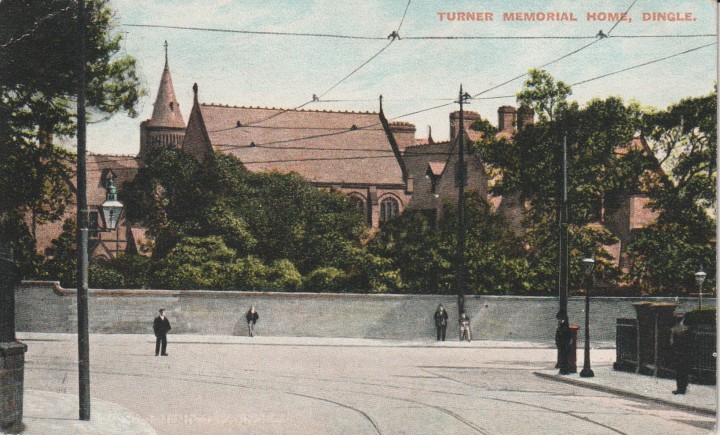 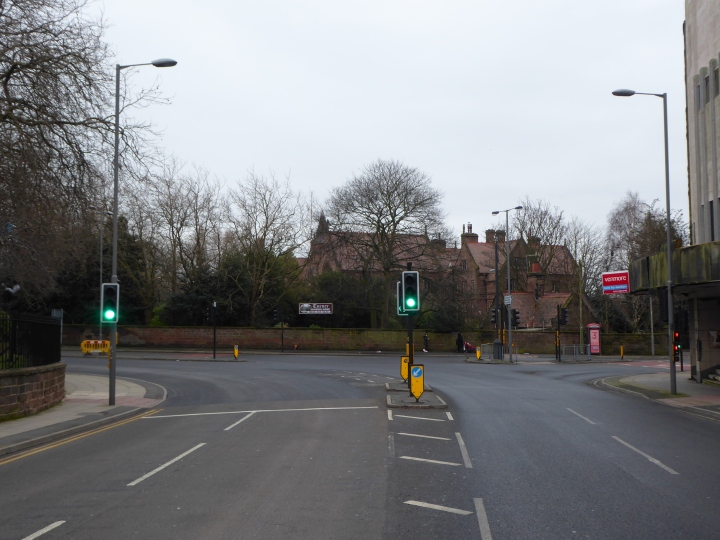 Two views of the same place taken in Liverpool about 113 years apart. The postcard at the top is dated 1905 and was sent from Birkenhead to Miss D. Caulson at Grange over Sands. The view is of the Turner Memorial Home, a large hospital and nursing home built in 1884 on land originally owned by the Yates family. The Yates family were Unitarians and had links with the Ancient Chapel of Toxteth, the corner of which outside wall can be seen in both pictures on the left hand side. They were ministers, radicals, campaigners and major benefactors to the city, Richard Vaughan Yates donating Princes Park to the city in 1842.

It’s a curving corner junction in both images although once, long ago, before Toxteth was developed, it was a country track. In 1905 tramlines curl around the corner. In 2018 traffic lights and traffic islands keep pedestrians and traffic apart.

The road has been widened since 1905 and the post box taken away. Thirty-two years after the first picture was taken the Gaumont Cinema was opened on the right. A striking art deco cinema it is a sorry sight today having been abandoned for twenty years. Seating 1,500 people it once was a key venue for the people of the Dingle. Sold at auction in the early part of 2018 it was listed on the market at £75,000. It looks like a private house occupies that site in 1905. Just seven years after the card was posted the first cinema was built on that corner, the Dingle Picturedrome, the predecessor of the Gaumont.

The postcard and the photograph tell the viewer very little about the Turner Memorial Home, an endowed gift from Anne Turner in memory of her husband and son to provide residential care for the sick, an institution which has remained in continuous operation ever since.

It is really a postcard view of a road junction, and a junction in time.

5 thoughts on “Two views of a junction in Toxteth”