Whenever I visit a place with Unitarian historical connections I find it is always instructive to see what Alexander Gordon made of things first. Gordon was a meticulous historian with remarkable skills which included an extraordinary ability to learn and read a vast number of languages. Consequently even though much of his writing dates back 140 years his work retains valuable insights and is often the base line for much of the research that came after. This is especially true for his work on continental Unitarianism where his research and reading across many sources and in many obscure archives and library has been repeated by very few English-speaking scholars ever since.

I am very grateful to Sue Killoran, the librarian of Harris Manchester College, Oxford, for providing me with copies of two letters he wrote to the Christian Life while travelling around Poland in 1879. The first letter concerns the grave of Fausto Sozzini/Faustus Socinus. Alexander Gordon was, quite probably, the first person from Britain to visit this site, this was in August 1879. His journey to get there was rather more convoluted than ours, we travelled in an air conditioned coach from Kraków in about two hours, on what might now almost be called a well trodden pilgrim route. Gordon first of all had to identify the spot. He made ‘fruitless enquiries’ in Kraków and Breslau (now Wrocław) but eventually found Lusławice on a military map. The nearest railway station was at Bogumilowice some twelve miles away, but he got off the train at Turnow, sixteen miles away, and visited the grave by walking a circuit out to Lusławice and back to Bogumilowice.  A round trip, according to his own reckoning, of 28 miles. But, he said, “It was a fine walk, through a charming country, and the fatigues of the road were abated by a friendly lift for some five miles given me by a hospitable Jew.” Gordon was able to meet up with the Catholic priest in the nearest town of Zacliczyn who cheerfully offered to be his guide to the tombstone of Sozzini.

Of course, this is the tombstone rather than the site of the actual grave of Sozzini. Gordon was of the opinion that the site which he visited was the original site of the Lusławice Arian church, what he calls the Oratorium, but what survived of his grave was brought there some years after his burial.

Philip Hewett recounts how the site of Sozzini’s grave was in 1604 “as secure a setting for an arch-heretic as could be found anywhere”. But it wasn’t to be, most of the memorial and possibly also his bones were thrown into the river Dunajec a few years later. All that remained was the cube-shaped stone – “one huge block of limestone some 4ft. square” – which Gordon says once carried an inscription on each side. These were each in a different language but the only one that is visible today is in Italian. Although barely legible it says:

Which means ‘The one who virtue sows doth reap renown, and true renown doth triumph over death’. 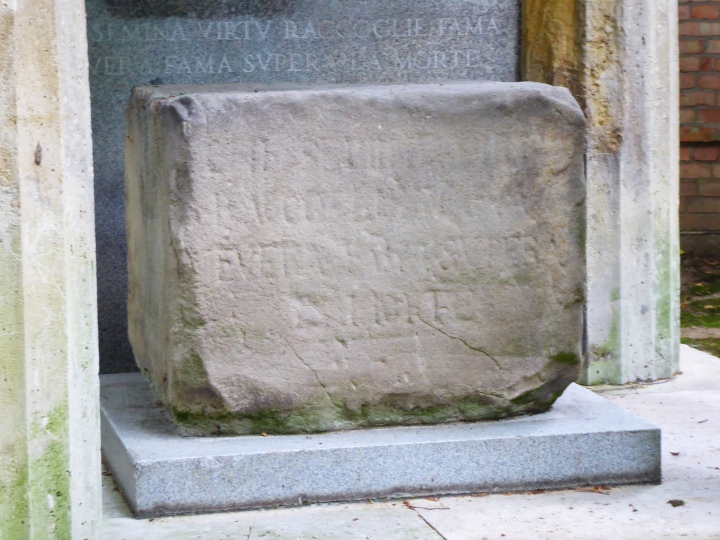 By tradition the inscription on his grave is also supposed to have said (in Latin):

Babylon is completely overthrown, Luther demolished the roof, Calvin the walls, but Socinus the foundations

But as Gordon observed in 1879 “there is no trace of the famous couplet which is said to have formed part of the epitaph”. Gordon also noted another stone with the initials SW inscribed on it. This he took to belong to the Wiszowati family who were related to Sozzini by marriage and continued to lead the Polish Brethren after his death. I take it that this is the flat stone in front of the memorial.

Sozzini was forced to leave Kraków in 1598 and found sanctuary in Lusławice where he died in 1604. When Gordon visited the site of his memorial it consisted of no more than the two stones. In the twentieth century, largely at the direction of Earl Morse Wilbur the memorial was created. Designed by Adolf Szyszko-Bohusz, a prominent Polish architect, it was built in 1933. In fact the memorial was moved again at this time to the inside of the grounds of the local estate. 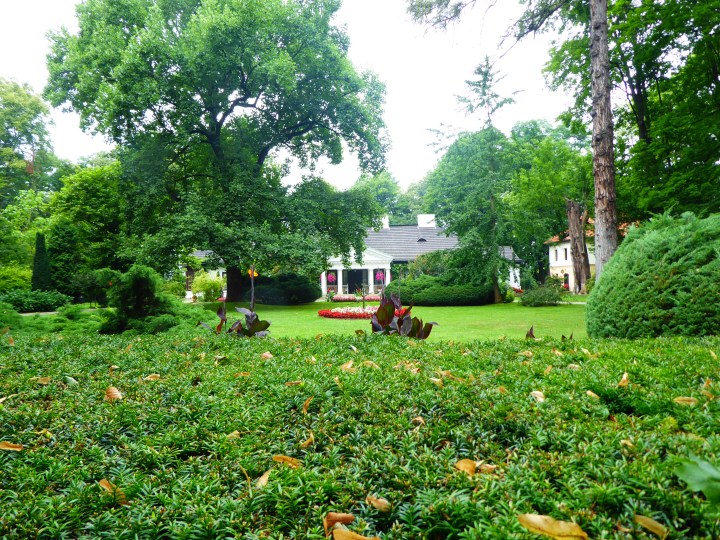 Gordon had noted this estate when he came in 1879 – “The adjacent Schloss is modern, but with traces of antiquity about it” – and today it is owned by the eminent Polish conductor and composer Krzysztof Penderecki. It seems a more fitting setting for the memorial to be inside the impressive grounds of this estate with its plentiful trees and shrubs said to include no less than 700 varieties of plants.

The surroundings are still as appealing as when Gordon saw them:

“The spacious garden adjoining Sozzini’s last resting place, lies in the midst of a secluded but rich and fertile vale, sprinkled with noble trees, and embosomed by a glorious amphitheatre of swelling hills.”

Nearby, Krzysztof Penderecki has built a most impressive music college. We were privileged to get to visit it and hear renditions of Polish Brethren songs adapted for a solo voice accompanied by a lute.

3 thoughts on “The grave of Fausto Sozzini”