In 2014 the installation ‘Blood Swept Lands and Seas of Red’ was in place at the Tower of London. It seemed to capture the popular imagination in a powerful way. Created by artist Paul Cummins and designed by Tom Piper 888,246 ceramic poppies cascaded out of the Tower of London to progressively fill the moat. Each poppy represented a British military fatality in the First World War.

The story of the poppies at the Tower of London can be seen here:

It is interesting how art and remembrance could combine so effectively in people’s minds and the poppies from the installation have continued to be used in different ways around the country since, part of the installation moving to St George’s Hall in Liverpool in November.

I was fortunate to be able to see the ‘Weeping Windows’ installation in Liverpool shortly before it ended on 17th January 2016.

Several thousand poppies poured from a high vantage point in the Hall on to the ground below. As such a significant building St George’s Hall made a magnificent backdrop for the poppies and over 300,000 visitors are estimated to have travelled to see it in place.

As the notice at the installation made clear this was a particularly appropriate venue for such a display. The plateau outside St George’s Hall became the rallying point for the men who formed the Liverpool Pals under the direction of Lord Derby in the First World War. In March 1915 Lord Kitchener inspected nine battalions of Liverpool Pals formed up outside the Hall, local men who had volunteered to serve together. In the years after the First World War the memorial for the dead of the city was placed outside the Hall and near here the installation was placed. 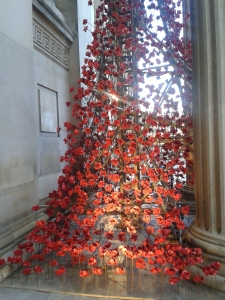 Altogether a moving and impressive display.