I last visited Todmorden Church decades ago and it was in a pretty sorry state then, heavily vandalised and with no electricity, it had an air of dilapidation about it. So it was good to return in the company of some colleagues to see the church now.

One of the things you can’t miss about the church is its dominance on the landscape, it is a big church, an impressive feature of the local topography. But what I had forgotten and what in some ways it is easy to miss is the attention to detail within the building – the marble inlays, the subtle little carvings, the attractive stained glass windows, even the colours of the massive marble pillars. Partly this is because it is actually quite dark inside. The Unitarian Heritage An Architectural Heritage says it has an “under-lit interior” and blames this on the stained glass by “M. Capronnier of Brussels”. An excellent new book Chapels of England Buildings of Protestant Nonconformity by Christopher Wakeling (Historic England, 2017) describes it as the “one unmissable place of worship in Todmorden” and says “despite the clerestory windows – externally unseen – and tiny openings higher in the roof, the light levels foster a sense of religious mystery, augmented by the stained and coloured glass.” I tend to agree with the Unitarian Heritage assessment, I do find the interior a bit too dark but that is a minor quibble. It is a fine building designed by John Gibson of Westminster who also built the local town hall and the Fielden family residence.

Since 1994 the church has been in the care of the Historic Chapels Trust and they seem to be doing a good job, with the church being looked after by local volunteers. They have a varied programme of activities in the church including regular services plus weddings and even some recent christenings. When we visited, Joanna and Richard kindly took time out to show us round.

The church now has kitchens and toilets sensitively added to the interior which perhaps underlies what a valued resource for local people this church building is. Its history is fascinating, coming, as it did, out of the Methodist Unitarian movement founded by Joseph Cooke and building a new chapel, which still survives, in 1824. The congregation was taken under the wing of enlightened mill owner John Fielden who extinguished their debt and whose three sons built the new church as a memorial to their father, built, it was said at the time, “for the public worship of the one God the Father, and for the instruction in the simple teachings of Jesus Christ, as opposed to such traditional doctrines as those of original sin and eternal punishment”. It opened for worship in 1869 and cost around £35,000. It is the only Unitarian church that I know that has a porte cochère where the wealthy benefactors could dismount and enter the church by a side door protected from the elements. Two of the sons are buried close to the church and matching memorials to all three of them are found on the walls of the interior.

The church has what must be one of the earliest and most elaborate church fonts of any Unitarian church, it is probably in need of restoration but it still in better condition than when I last saw it.

Detail on the font

One feature of Todmorden is the repeated motif of the pelican, I am not sure why this is such a popular image here but there is a pelican in the chancel window, and two carved in the choir stalls. There is possibly also another one carved in the end of a pew (almost all the pew ends feature flowers except for this one which houses an angel and what may be another pelican).

It is heartening to see the clock working and to know that the peal of eight bells are still rung by local bell ringers. Todmorden was a really flourishing congregation for most of its existence and it is interesting that this large building and its congregation left such an imprint in the locality that even now worship continues within it and it provides the home for much activity. It’s good to see the gradual recovery of Todmorden Unitarian Church.

The view up the carriage drive 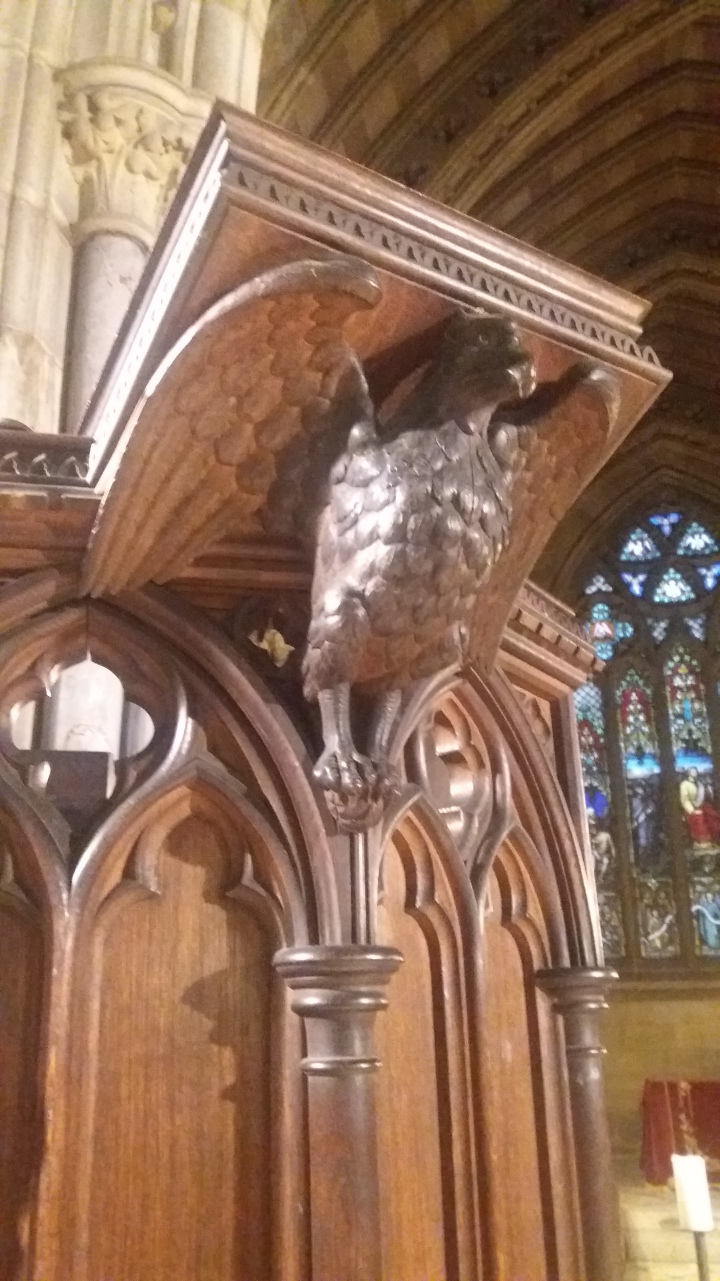 A 360 degree view of the interior can be seen on the church’s website:

A couple of people have pointed out to me that the carving in the choir stalls which I originally named as a phoenix is in fact what is known as a ‘pelican in her piety’. It is the mother pelican who – in the ancient story – feeds its own chicks (or revives them after they die) with its own blood. I had confused this story with that of the phoenix which, of course, is famous for its ability to resurrect itself. Both the phoenix and the pelican became popular within Christian iconography from early times to represent Christ, for obvious reasons. But I am happy to make that correction and rename the image in the choir stalls. The carving on the pew end looks a good deal more phoenix like, although, to be honest, the photograph I took is not as clear as it might be and I am not able to make a certain identification. It is quite plausible that there are both phoenixes and pelicans in the church, but nevertheless I have removed the references to the phoenix and given credit to the pelican. Both are actually slightly surprising images to be found in a Unitarian church of 1869. The presence of a ‘pelican in her piety’ in Todmorden is probably a unique occurrence in a Unitarian church – unless anyone else knows differently!