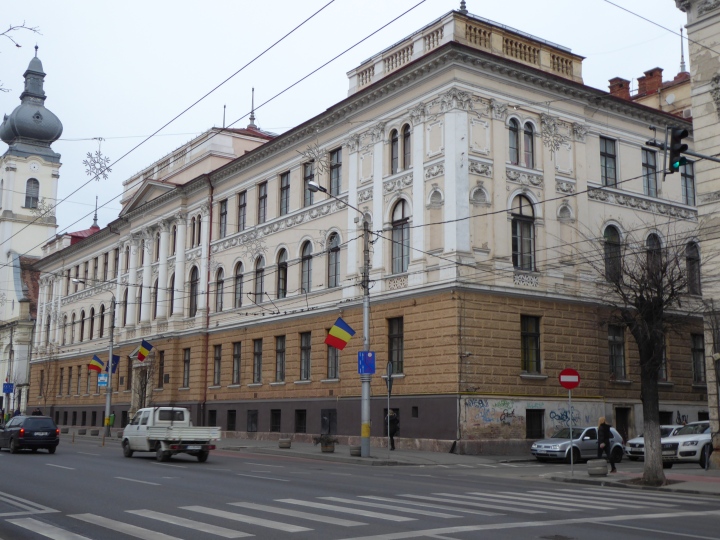 Recently I have published a couple of ‘then and now’ shots featuring Edwardian postcards and contemporary photographs on this blog. One featured a view of a street in Toxteth and one some of the churches in Banbridge. This is another ‘then and now’ view but, in this case, it is taken from a glass lantern slide of the Unitarian College building in Cluj/Kolozsvár.

I have an interesting set of magic lantern slides depicting notable sites in Hungary and Transylvania, some of them showing groups of people at what must be some sort of gathering, possibly international. The purpose of the collection, which is in a poor state and which is probably not complete, is to illustrate something about the Unitarian history and life of that region. They are not easy to date exactly but this slide helps enormously.

The Unitarian College was built in 1901, then a very modern, state of the art building which is still impressive and giving excellent service as headquarters, College as well as senior and junior schools.

It is right next door to the First Unitarian Church which can just be seen on the left of the photograph. This helps us date the slides since the College was built in 1901 and the church had the top of its tower replaced in 1908. In that year Lajos Pákey, the city architect who was educated at the Unitarian College and was also responsible for many of the prominent buildings and monuments in the town, redesigned the tower in its present baroque form. I had always assumed that this feature dated to the 1790s when the church was built and had never seen a picture of the original tower before finding this slide.

By chance I took a picture in January 2018 from the same place as the photographer of 1901-1908, not surprising since there are not so many vantage points for such a large building. But here we have the same view, separated by about 110 years.

As time and circumstance permit I will try and digitise the glass lantern slides and post them on here.

One thought on “Unitarian College Cluj/Kolozsvár”