Another curious detail of the First World War Roll of Honour of the Non-Subscribing Presbyterian Church of Ireland is the high proportion of servicemen who served in the Canadian Expeditionary Force. Out of the 588 names on the Roll a fair number served in overseas regiments including Australia (6), New Zealand (2), and South Africa (1). In addition there were four soldiers who served in the Indian Army and three joined up in the US Army. But by far the largest category for overseas service was the Canadian armed forces which totalled 27 personnel. Of these men 11 were killed during the war.

The congregations of All Souls’, the Domestic Mission, Mountpottinger, Belfast First Church, Clough, Downpatrick, Dromore, Glenarm, Holywood, Killinchy, Larne, Newry, Rademon and Templepatrick all number Canadian servicemen amongst those who joined up. Young men who had left their homes to begin a new life in a new country answered the call to return to Europe to fight in the war. As a Dominion Canada declared war on Germany in conjunction with Great Britain and a high proportion of the early volunteers in the Canadian army were men who had emigrated originally from Britain or Ireland.

One feature of the Canadian – and also Australian and New Zealand servicemen – is the online availability of their full military records. It is quite simple to call up their records and follow their careers from enlistment onwards in some detail. It is painfully sad to read of young men killed in France or Flanders and the Canadian authorities making arrangements to send a widows’ pension to their wife perhaps in Winnipeg or perhaps in county Down. It is frequently sad to read the records of those who survived the war. Few came through the years of conflict without a wound or some experience of disease or illness. Many must have suffered for the rest of their lives. 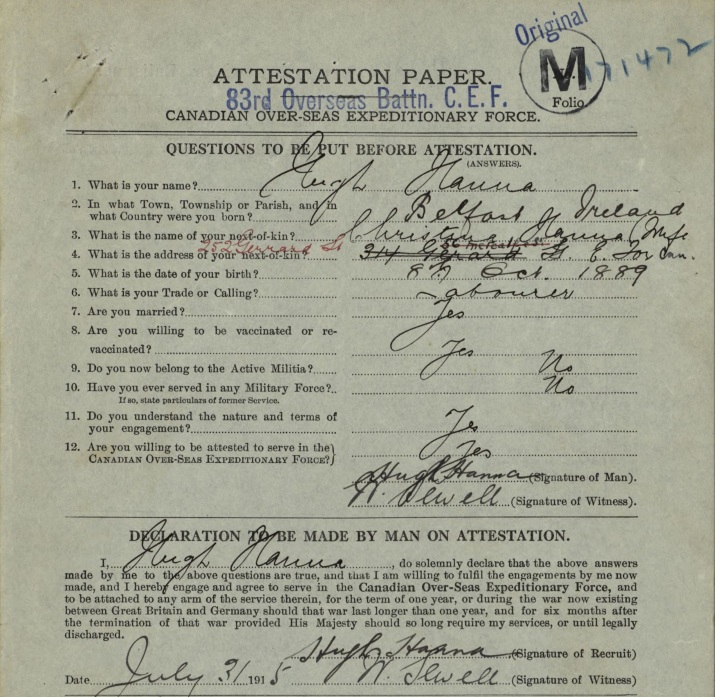 Extract from the attestation papers of Belfast born Hugh Hanna, a member of Mountpottinger congregation who was killed serving with the 3rd Battalion Canadian Infantry. (At the top of the page can be seen part of the enlistment papers of Robert Black, a member of Downpatrick, originally from Hollymount, Ballydugan who served with the 20th Battalion Canadian Infantry but who survived the war and was discharged in January 1919).

Both images are taken from: