It is hard not to imagine that every feature of dissenting meeting-houses has been subject to some serious scrutiny at one time or another. The regular publication of surveys of non-conformist churches and the work of the Chapels Society are testimony to the ongoing interest that there is in these types of buildings. But I was led to reflect on one aspect of the history of old meeting-houses that may not have had too much attention over the years by the ‘discovery’ recently of a long discarded pew number in my church at Ballee.

It wasn’t really a discovery since I and many people knew it was there all along but, for the first time, I took a close look at it and realised that it is a work of art in its own right. When the Ballee meeting-house was refurbished in 1912 they replaced the old box pews with ‘modern’ open ones. They may have re-used the timber from the old pews to make the new ones, they certainly used the old pews to make partitions and features in the rooms they created in both ends of the long arm of the ‘T’ of the church.

This number 12 is in the inside of a cupboard in the vestry. When you look at it, a lot of the wood which was used there and in the library and in the store room at the other end of the church, must clearly have once formed the original box pews, probably dating back as far as the early eighteenth century. Much of it has been stained a very dark colour but in some places the original colouring can be seen and there are two places where the pew numbers are visible. One is a slightly faded number 22 but the other is this one inside the vestry cupboard.

It has been protected from the sun for over a hundred years and it is clear that at some point after it was painted on the door of the pew when in situ someone had carefully left it untouched when re-varnishing the rest of the door. An expert could probably date this number more or less exactly. I would guess it dates from the end of the eighteenth or the start of the nineteenth century. It is certainly very carefully done. It must have been an important project for the congregation at that time to see that their pews were so clearly labelled, and done in such an attractive manner.

For most types of dissenting congregations pew numbers and pew rents were a central feature of the finance and management of a church or chapel. Who owned which pew and who sat where were important questions so their clear numbering was an important thing. For the historian financial records of pew rents are an important source but I can’t remember much discussion of the way numbers were added to pews.

In the nineteenth century, and probably before, it was possible to buy ceramic or brass numbers to fix on pew ends or doors. But very often the numbers were painted on. The pews in Ballee today are all unnumbered, as they are in Clough. In Downpatrick, which still has its original box pews, the numbers have all been removed downstairs but they survive in the galleries. These are very neatly done and to me look like eighteenth-century adornments. 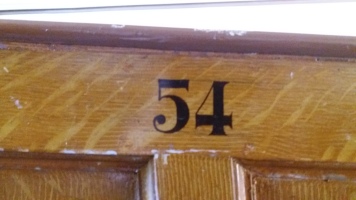 Some of the Downpatrick numbers

But the now almost completely vanished pew numbers from Ballee must have looked very impressive. I will look out for more examples of historical pew numbering from now on.